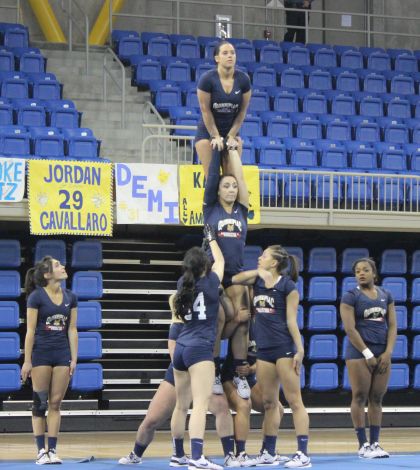 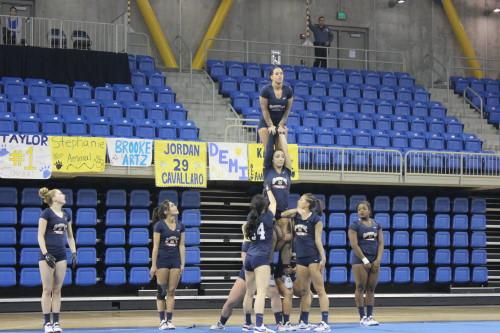 The Bobcats bested the Falcons by a margin of 31.68 points for their largest win of the season.

“We wanted to get that team routine score higher,” head coach Mary Ann Powers said. “With three practices left, I’m really proud of what they did today.”

In the first Compulsory event, Quinnipiac edged Concordia, 38.45-34.40, to take an early lead. The Bobcats swept all four of the acro, pyramid, toss and tumbling heats in this event.

The Pyramid event followed as the Bobcats swept all three heats totalling 29.95 of a possible 30 points. The Bobcats scored two perfect tens in the flip and release heats, while a 9.95 was scored in the twist heat.

With three events left after the intermission, the Bobcats wasted no time picking right where they left off as they totaled 29.55 points to Concordia’s 26.35. The open heat scored the highest of each heat in this event with 9.95.

Senior captain Taylor Johnson led the Bobcats’ strong effort in the Tumbling event by scoring a season high (9.83) in the open pass heat to help build the 56.00-47.05 lead in the event. Going into the Team event, the Bobcats led overall scoring 183.70-164.00.

In a season led by veteran presence, Powers said it was fitting to end the regular season with a big win at home on Senior Day.

“Being Senior Day and having to wish well to eight incredible young ladies that have really pushed this sport forward to the future,” Powers said. “It was just good to see them have a great final home meet.”

Next up, the Bobcats will compete in the NCATA Championships starting on Saturday, April 16 through April 19 at Baylor in Waco, Texas.