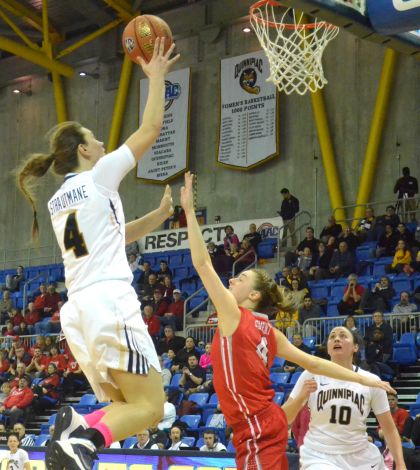 Quinnipiac women’s basketball took on Iona on Monday, March 7 in the Metro Atlantic Athletic Conference tournament championship game at the Times Union Center in Albany. It was the program’s fourth-straight conference finals appearance. 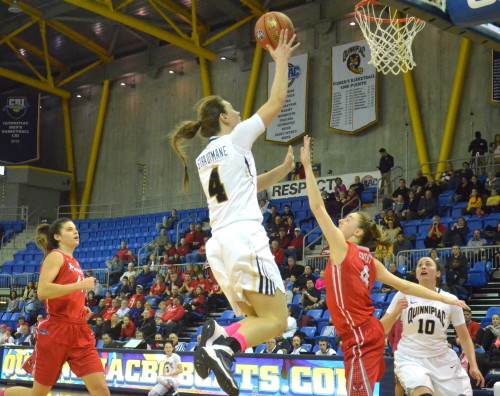 The Bobcats lost 57-41, snapping a 19-game winning streak and ending any chance they had at participating in the NCAA Tournament for the third time in four years.

While covering the game, I couldn’t help but notice that the contest felt like an Iona home game. Iona had so much support that it had enough fans to fill a couple of sections of the arena. They were easily able to out-cheer the families of the Quinnipiac players, as well as the few dedicated fans that drove a little over two hours to cheer on the Bobcats.

So here’s my question: Why didn’t Quinnipiac provide fan buses to Albany for the women’s MAAC championship game?

As the weeks passed by, Quinnipiac men’s ice hockey continued its dominance over ECAC rivals. Ultimately, the Bobcats were able to win the regular season conference title and the ECAC Hockey Tournament Championship for the first time in program history. This allowed the program to secure the No. 1 overall seed in the NCAA tournament, meaning its regional games were held at the Times Union Center in Albany this past Saturday and Sunday.

Two days after men’s ice hockey was placed in Albany, emails were sent to all students presenting the opportunity to buy tickets for Saturday’s game, saying that a fan bus would be provided for those interested in going.

Why would a fan bus be provided for the men’s ice hockey tournament game, but not the women’s basketball conference tournament championship game? Especially with the games being played at the same venue.

Since the game was on a Monday, perhaps Quinnipiac didn’t want to encourage students to miss class for the game, which is understandable.

However, I thought back to 2013, when men’s ice hockey made the Frozen Four, which was held in the Consol Energy Center in Pittsburgh. Quinnipiac took on St. Cloud State on April 11, which was a Thursday. Fan buses were provided to that event.

To put that into perspective, Quinnipiac sent fan buses 462 miles (approximately a seven-hour drive) to Pittsburgh to watch the national semifinal game on a school day, but did not send fan buses 148 miles to the women’s basketball MAAC tournament championship game.

One would think that, with issues involving sexism and gender inequality in sports, Quinnipiac would make an attempt to do the “right” thing and appeal to both teams, especially with the issues the university has had with Title IX in the past.

Title IX, which was created in 1972, is a law that requires schools to provide equal opportunities for females and males.

It was ruled that Quinnipiac could not get rid of its volleyball team because that would mean the university would not provide the same athletic opportunities for men and women. Quinnipiac then added acrobatics and tumbling and women’s golf in 2010, then women’s rugby in 2011 to try to satisfy Title IX requirements.

The U.S. Department of Health, Education, and Welfare (HEW) issued a final policy interpretation on the law, laying out a three-part test to verify Title IX compliance:

The number of athletes from each sex at a school must be roughly equivalent to enrollment percentages, or

A school must demonstrate a history and continuing practice of expanding athletic opportunities for the underrepresented sex (most commonly, women), or

A school must show that the interests and abilities of female athletes are being fully and effectively accommodated.

Not providing a fan bus for a women’s title game but for a men’s regional game in the same venue is not a severe enough violation of rule No. 3 to cause Quinnipiac to fall out of compliance.

However, with a history of falling out before, Quinnipiac should tread lightly and be more cautious when making decisions that would put the university at risk yet again.

I reached out to Quinnipiac Athletic Director Greg Amodio, to ask why there was a fan bus for one team and not the other, but he did not respond for comment.