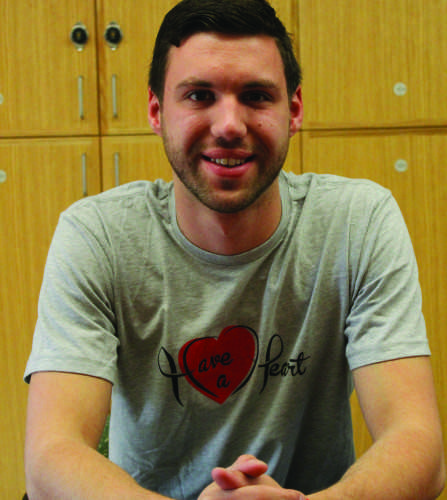 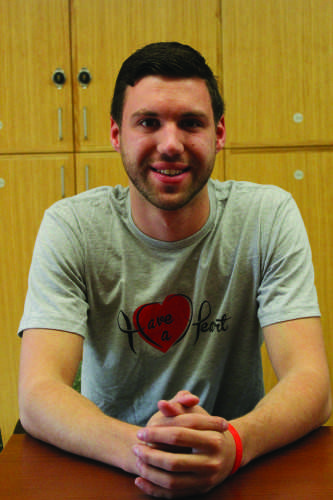 Bobby Palmieri, a junior entrepreneurship major, knew he wanted to make a difference after losing his dad to a heart attack when he was 10 years old. Weeks after his father’s passing, Palmieri sold red bracelets that said “have a heart” around his hometown and raised more than $2,000 for the American Heart Association.

Fast forward 10 years and Palmieri still wants to make a difference, this time by giving out scholarships to students whose parents suffer from heart disease like his father did.

The Have a Heart organization started up again last October on the Quinnipiac campus on a crowdfunding campaign and raised $10,000 in 55 days. This time around, the money is going toward a scholarship for a student who has also lost a parent to heart disease.

“When I raised the $2,000 for the American Heart Association, I’m sure that money went to great things but I do not really know what it did,” Palmieri said. “[Through the scholarship], the money has more of an immediate impact on a person who has lost a parent to heart disease. I’ve always felt that if someone donates money, they should see exactly who their money is helping. With the scholarship recipient, people who contribute in any way will know where their money is going.”

The organization started in October with simply selling merchandise and has grown into something much larger. Palmieri has made it a point to incorporate interactive events and activities, to build a relationship between Have a Heart and the community.

“We did a basketball tournament, a fitness bootcamp and other things like that,” he said. “We are looking to do more events rather than just selling. We have a decent brand now that people recognize where we can do events. Now that we feel like we have that following we can go forward.”

Palmieri said all the business resources he has gained have been through his professors at Quinnipiac.

One of those professors is Dale Jasinski, associate professor of entrepreneurship. He met Palmieri as a student in his introduction to entrepreneurship class and as his academic advisor. Jasinski was very impressed at Palmieri’s ability to overcome a tragedy and start up a unique organization with such determination and purpose.

Palmieri started collecting donor money for the scholarships in his hometown and at Quinnipiac, spreading his cause by word of mouth. Events are a major part of promoting Have a Heart, so that the group can get the word out about the scholarships and how to donate to the cause.

“We are hoping by the end of April, we can get an event on campus,” he said. “The idea behind all the events is to promote heart health, so any event we do would be heart healthy. We would never do a chicken wing eating contest, but rather a basketball tournament, or a walk because it is in line with what we are trying to promote and do.”

Palmieri plans to give out this first scholarship this summer. Anyone who is interested may apply for the scholarship on the website haveaheart.co. The application will model a standard scholarship application and will include the school the applicant is attending, GPA, extracurricular activities, and an essay. The essay will really be the determining factor, Palmieri said, and should ideally be about how heart disease has affected the applicant and made them a stronger person. The scholarship will continue over the course of the winners’ four-year higher education, or however long they attend school for.

“If [Bobby] had worked in a private cubicle, keeping his story, plans and goals restricted to a business plan shared with just a few people, he would probably still be thinking about a foundation instead of actively running it,” Jasinski said. “By reaching out, validating his assumptions and talking to people about it, he was able to build a network of awesome people and organizations who have helped fuel Have a Heart’s growth.”

Palmieri is also hoping to spend some of the money raised on little gifts for local families who have been affected by heart disease.

“All the money we raise is going to something, but we do have a separate side where we are trying to help families to have lost a parent to heart disease by giving gifts in a way,” he said. “So if a family lost their dad, and the kids are big Red Sox fans, we are going to buy them Red Sox tickets to help with the grieving process. All of the money will be given to families who have lost a parent, whether it is scholarship or gift.”

The scholarship is the main priority as of right now and will receive most of the donation money.

The organization has close relations with Quinnipiac, and Palmieri does a lot of his advertising and promoting through Quinnipiac students and faculty. He restarted the organization on campus with a crowdfunding campaign event and sold the first t-shirt on campus. Since then, he has held one more event on campus and hopes to have two more soon.

The origins of Have a Heart and its many steps to success are a great example of the “modern approach to teaching entrepreneurship” that the faculty use in Quinnipiac classrooms, Jasinski said.

All of the faculty in the entrepreneurship department have the same approach to students. According to Jasinski, professors see themselves as mentors and coaches.

“In Bobby’s case, it has been a source of personal joy for us to work with him as he takes the advice we give him and applies it to a very impactful and rewarding organization,” Jasinski said. “He is receptive to criticism, willing to learn, never lets failure stop him, and is generous with his own time to share his own experiences and advice with other students.”

In terms of the success of Have a Heart and Palmieri’s individual success Jasinski predicts only good things to come.

According to Jasinski, Have a Heart could become an international foundation that helps kids get the college education they desire, or, Palmieri could focus on his own region and include counseling, family support services, and provide a larger range of benefits to a fewer number of students.

Although Palmieri is currently running and managing this organization on his own, his many supporters and followers are invested in the success of Have a Heart.

“It’s a one-man team right now,” he said. “I mean there are tons of supporters and people who have helped me along the way but in terms of the business side and the cause, it’s just me.”