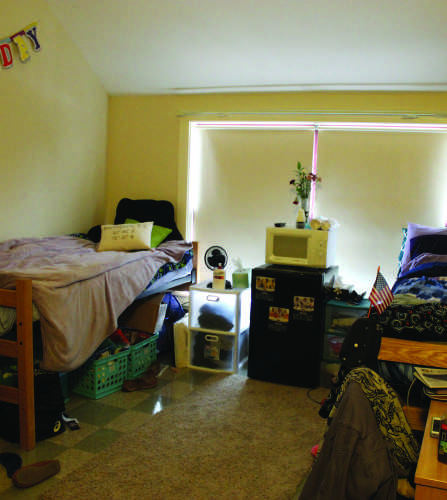 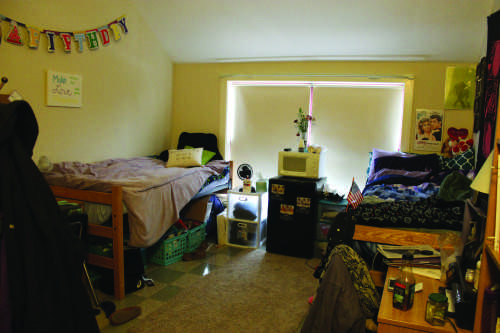 Students are unhappy with the changes Residential Life has made for sophomore housing next year. The university implemented these changes due to the size of the Class of 2019.

In the past, Village, a sophomore residence area, has accommodated seven students; now the three-bedroom suites will house eight students. This means one of the doubles in Village will be converted to a triple.

“It’s so infuriating because now I don’t have a set room because I only have seven people in my living group,” freshman Cassie Cala said. “Everyone is struggling to find one person to add to their group of seven.”

The forced triple in Village isn’t the only change being made. Next year, Bakke in Complex will be switching from a sophomore to a freshman residence building. Sahlin, which is currently a freshman building, will house sophomores next semester.

Cala isn’t a fan of the updates.

“I think Mountainview should have been made into a sophomore dorm and all of Complex should be freshman,” Cala said.

Mountainview used to house sophomores, until the university made it an all-freshmen residence hall starting in the fall of 2013.

Freshman Jenn Fusco lives in Mountainview this year and she would have liked to live in Village if all the rooms were doubles.

“I wouldn’t be opposed to living with seven other girls again if the rooms were all doubles like they are in the freshman suites,” Fusco said. “Having eight girls in a room where two of the three rooms are triples can be recipe for disaster.”

This is not the first time Residential Life has had to make room for the large Class of 2019. At the beginning of this year, current freshmen experienced a similar situation when study lounges in Commons and Ledges were converted into rooms for eight people.

Founders, Perlroth, Troup and Hill will remain as sophomore residence halls. Founders will have room for six students, Troup and Perlroth housing eight students, and Hill being available for seven.

“If I got Village and have to cram eight people in there instead of seven I would be really upset,” freshman Crystal Kantzas said. “It’s super small as is, and adding extra people is not a good idea.”

Associate Director of Residential Life Melissa Karipidis said Village is a popular place for students to want to live. Even if a group’s first choice is Village and they cannot get it, there are other buildings they will be able to choose that are available for eight residents.

Alexa Zeoli, a current sophomore who lives in Village this year, rooms in a triple. She can’t imagine living with seven other people instead of six other people.

“I can’t even imagine how it’d be if the doubles are being turned into triples,” Zeoli said. “In the bathroom, there are only two stalls and one shower. I don’t even know how eight girls are going to share one shower.”

Zeoli understands why the university had to make the changes, but she is glad she doesn’t have to go through it.

Sophomore housing lottery numbers and registrations times were released on March 21 on MyHousing.

Kantzas said she thinks the lottery system makes a lot of sense.

“It’s definitely fair. I feel that if it wasn’t a computerized lottery, it’d be really easy for students to manipulate their numbers,” Kantzas said. “It’s all about luck.”

Freshman Emily Ledyard is hoping to live in Hill next semester with her friends.

“It has a homey feel. We’d have a kitchen and we really like the idea of being able to cook for ourselves,” Ledyard said. “It’s also not too far from our classes or from the cafe when we don’t want to cook.”

Ledyard and her friends were gifted with lottery No. 31, so she is confident they will get the room they want.

Rooms become available for future sophomore students to claim on April 4 at 9 a.m.