Students abroad in Brussels airport were not harmed during terrorist attack 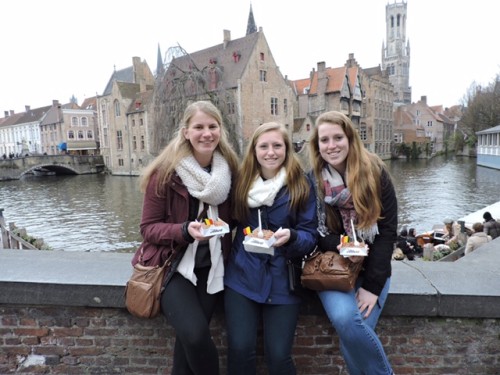 From left: Lauren Cleary, Monica Hall and Cate Duffy during their semester abroad.

Three students studying abroad are safe after witnessing Tuesday’s terrorist attacks at the Brussels airport. The students were not injured and are currently staying at a U.S. Embassy employee’s house.

Another student, who is studying abroad in Belgium, was not at the airport and is also safe, according to Associate Vice President for Public Relations John Morgan.

Sophomore occupational therapy majors Cate Duffy, Lauren Cleary and Monica Hall are studying abroad in Cork, Ireland and were traveling for their spring break. The three students were on their way to London for an Adele concert when the bombs went off in the Brussels airport, one exploding nearly 50 feet from them, according to Duffy.

“It was huge. It was like a fire explosion, it shook the floor,” Duffy said. “The ceiling started falling. At that point everyone started running and screaming, we ended up staying all together and we made it out of the airport and ran as far as we could.”

After running from the airport, the group was desperate to find a safe place to go. Cleary said they were able to flag down a man driving with his son. The man drove them to the U.S. Embassy where they spent most of their day.

“It was interesting going [to the US Embassy] because not everyone knew what was happening,” Cleary said. “People were still going about their daily lives meanwhile there’s just traffic piling into the city because of all that is going on at the airport.”

Both Duffy and Cleary had bigger backpacks they were living out of for their spring break, but Hall had a small bag and a rolling suitcase.

Hall said she dropped her bags in the airport because she couldn’t run with them.

“When the first bombs went off and we were running, I had my bag with me for like five or 10 seconds of the commotion and I tried to pick up speed running,” she said. “I realized that just wouldn’t work and my bags weren’t important enough to get me killed, so I just dropped them.  Cate [Duffy] jumped over them and we ran out of there as fast as we could.”

Hall has her identification with her as well as her tickets, journal and camera, but left all her clothes in her bags at the airport.

Cleary said the experience was traumatizing for the three students.

“When it happened we were freaking out,” she said. “We were crying; it was completely chaos. Throughout the day we have been on edge, even just little things like someone entering a door, when we were eating a buzzer went off for fries and we were like, ‘oh my God.’”

Cleary said they are still trying to register what they experienced.

“It almost feels like a movie. It doesn’t seem like real life like this is actually happening,” Cleary said. “But we are doing okay, I feel like we are just handling it all and it’s just something we are still registering and trying to move forward.”

Duffy said the group did not see anyone injured or killed from the attacks in the airport.

“I saw people hit the floor out of shock and duck and cover kind of reflex, but luckily all of our instincts were to run as fast as we could,” she said. “We were out of there before we even saw anything, before the police even got there. So I think we were lucky in that sense to not see anything tragic.”

Even after the experience, all three students still want to continue their spring break trip and their semester abroad.

“We thought about [going home], but then we realized that we really shouldn’t miss out on the opportunity,” Duffy said. “We have another week and a half for our spring break and obviously London didn’t work out today, and we think we are just going to be smart and cautious and pay attention to the news and make sure we are not going anywhere that they suggest to stay away from.”

The students were supposed to travel to London, Paris, Switzerland, Munich, Prague and Budapest throughout their spring break, but are still deciding whether they want to go to Paris. Hall said the group will probably still travel to Switzerland and skip over London and Paris.

“We are in the midst of trying to figure it out,” Hall said. “We don’t know whether or not we are going to hang around or go somewhere else instead of our Paris trip yet…We aren’t sure if that is the place we want to be after all that has happened.”

Terrorists attacked Paris late last year, and authorities caught one of the suspects of that incident last week. Before today’s explosion in Brussels, U.S. officials had warned the capture of the suspect could lead to another terrorist attack, according to U.S. News.

Airports in Paris and across Europe tightened security after today’s attacks, according to the New York Post. New York City and other U.S. cities are also increasing security today, according to CNN.

Even with the situation still looming, Duffy said she and her friends won’t let this stop them from enjoying their time abroad.

“Obviously we are nervous but we don’t think that this should hold us back from seeing the world,” Duffy said.