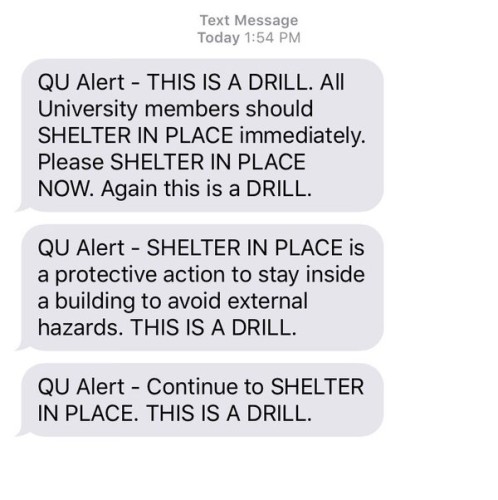 The university issued a shelter-in-place drill on March 21 to educate the community on what shelter-in-place means and to provide practice for any future emergencies, according to Associate Vice President for Public Relations John Morgan. 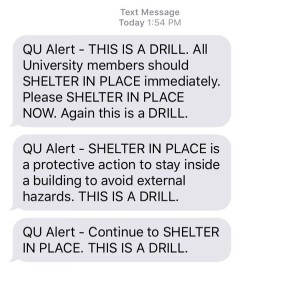 “Shelter-in-place is a protective action to stay inside a building to avoid external hazards,” the alert said.

“Thank you for participating in the drill,” the alert said. “Please send feedback to the emergency management via university email. Please resume normal activities.”

Junior journalism major Marisa Casciano was in her room on York Hill during the drill. She stayed in her room throughout the time–she hadn’t been planning on leaving anyway.

“The first time I got the text I had to reread that it was a drill because I was really confused as to what was going on,” Casciano said. “And I feel like in high school or elementary school you have fire drills and I don’t ever remember–other than the dorms–having fire drills here. So I just remember reading and thinking something super serious was going on and then it said this is a drill and I was like ‘oh.’ I was just taken aback.”

Michael Kannemeyer, a junior marketing major, also stayed in his room during the drill. But he said if had not already been inside, he is not sure he would have gone into a building once he got the alerts.

“If I was just hanging out on the Quad and it was a nice day, I don’t know if I would have gone up to go inside to find shelter just because I knew it was a drill,” Kannemeyer said.

Junior civil engineering major Paige Wilber, who was in the Center for Communications and Engineering at the time of the drill, agreed with Kannemeyer.

“I think it’s a good concept, but when you say that it’s a drill nobody’s going to listen and actually do it,” she said. “And the fact that that’s never happened before at least that I’ve known of. Everyone was kind of like, ‘Are they serious right now? What’s going on?’”

While Kannemeyer said it was important for the university to hold the drill because it shows the QU Alert system works well, he said the university did not do a good job explaining the purpose behind the test.

“My main thing is I wish they had explained to us what they were doing, which I don’t think they did at all,” he said. “I also wish they told us where to go. Just find shelter, but where do I go? I don’t really know. Let’s say there was an emergency, I wouldn’t know where to actually get up and walk to.”

Morgan said the Emergency Management Team is made up of administrators from all three campuses, and the team issued the drill.

The team also urges all members of the university community to sign up for Rave alerts by visiting Web Advisor, according to Morgan.

A shelter-in-place protocol is different from a lockdown. A shelter-in-place procedure is a protective action to stay inside a building to avoid external hazards, such as a tornado or hazardous-material release, according to the university’s emergency protocols and communications document. The document also defines a lockdown as a protective action that involves a serious threat in in the immediate area.

If the lockdown is because of an active shooter on campus, members of the community should stay where they are or go to the nearest room with a door, secure the room by locking or barricading the door, hide behind solid objects as far from the door as possible, close blinds or curtains, remain out of sight, stay quiet, and wait for the ‘all clear’ from authorities via QU Alert, according to the document.

Kannemeyer said the university should hold drills like this again, but he said there are ways to improve the way the drill goes down.

“I think it is important so people know what it looks like when [an emergency] happens, but I just think they should change it a little bit,” he said. “They could make it so people actually know where to go and what to do and in the future maybe give us a warning. I didn’t really get that worried about it, but maybe someone would get flustered by just getting a [text] that said find shelter.”