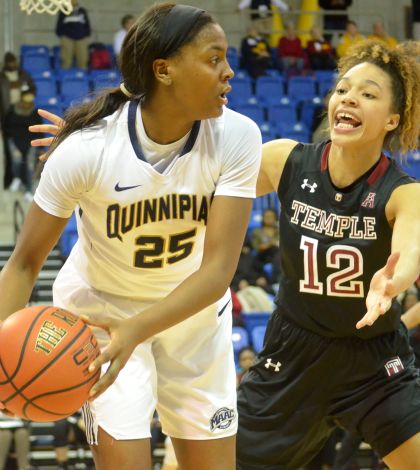 On Friday night, Quinnipiac women’s basketball was able to win its first ever postseason game after beating Maine 90-44 in the first round of the Women’s National Invitational Tournament. With the win, Quinnipiac advanced to the round of 32 on Sunday afternoon, hosting the Temple Owls, who Quinnipiac beat earlier this season 58-56.

With a trip to the WNIT Sweet 16 on the line, the Bobcats were unable to beat the Owls for a second time at the TD Bank Sports Center, falling 64-62. Despite the loss, Quinnipiac head coach Tricia Fabbri was grateful for the success her team had this season. 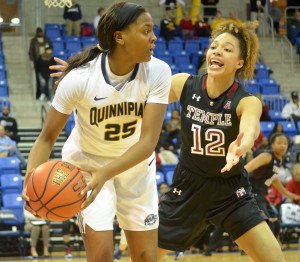 “It could be my most enjoyable and rewarding year in my 21 years as a coach at Quinnipiac,” Fabbri said. “Thank you to my seniors, 25 wins is an incredible season for us.”

Fabbri was able to help her team get over the loss it suffered in the Metro Atlantic Athletic Championship tournament title game that kept them from the NCAA tournament and instead helped them focus on the WNIT.

“We were ready to play,” Fabbri said. “We were ready for our March Madness, our postseason and ready to go as deep as we could one game at a time. I think that was pretty evident with our weekend of basketball against Maine and against Temple today.”

At the end of the first quarter, Quinnipiac led 16-14, with freshmen forwards Paula Strautmane and Aryn McClure combining for 15 of the team’s 16 points. However, foul trouble plagued the two and it affected the team in the second quarter.

With 4:03 remaining in the second quarter McClure picked up her second foul and headed to the bench and so did Strautmane soon after. Temple went on a 13-3 run to close the first half and Quinnipiac went into the locker room down 35-27.

During the run, Temple went into a full-court zone trap defense and the Bobcats struggled to get the ball up the court, turning it over 10 times in the half.

“We need to execute and be calm and stronger with the ball,” Fabbri said she told her team at halftime. “I think once we ran a homerun play and were able to soften them up a little bit, it became easier to execute and handle it.”

In the third quarter, the Bobcats were able to claw and fight their way back thanks to the strong play of Strautmane and McClure. Going into the fourth, Quinnipiac only trailed by three.

“This team had a lot of grit to it, a lot of toughness and some really good character to it all season long. It’s evident, even with today,” Fabbri said. “Just getting knocked down and still finding a way. We were down eight and able to cut it down to three in the third quarter and it’s just been a joy to coach a group of young ladies that want to win.”

The fourth quarter was a back and forth affair but Quinnipiac was unable to take a lead.

With 4:14 remaining, Strautmane fouled out, finishing with 19 points, eight rebounds and three blocks. She had five points and three rebounds in the first meeting. Fabbri was proud of how much Strautmane progressed over the course of the season.

It should happen with any player during a season when you put the time in and you have talent and want to get better and you are motivated and you want to win,” Fabbri said. “With her leading the way, she got real comfortable all season long and wanted those challenges. It was great to see her meet those challenges and exceed her own personal expectations of becoming a great player for us in a short amount of time.”

McClure fouled out with 16 seconds remaining and finished with 17 points, seven rebounds, five steals, four blocks and four assists. She totaled two points and two rebounds in the first match-up.

“They were matched up small with us in the post so we took advantage and went inside and scored,” McClure said. “It shows that we got more confident in ourselves offensively as the season progressed.”

With the loss, the Bobcats are eliminated from the WNIT and end their season with a 25-9 record. McClure said the team won’t hang on this loss but will use everything they learned this season as motivation for next year.

“Not just this game but this season altogether is motivation for next year,” McClure said. “We know our weaknesses that we have to work on next year and it adds more fuel to the fire.”