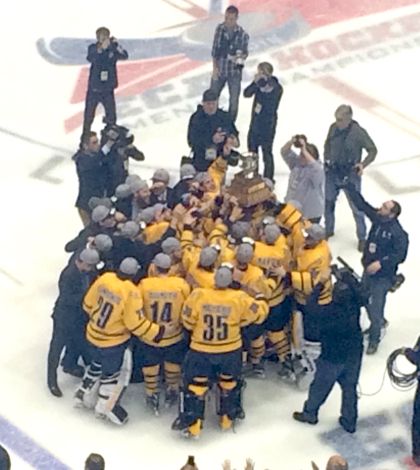 The group of seniors on Quinnipiac’s men’s ice hockey has won three Cleary Cups in their four years. The Bobcats have also advanced past the ECAC Hockey Tournament Quarterfinals in each of the last three seasons.

However, an ECAC Hockey Tournament Championship has eluded not only this year’s seniors, but the entire program.

Like many goals set for this program, the class met it. On Saturday night, the top-seeded Bobcats defeated No. 3 Harvard 4-1 in front of a crowd of 4,626 at Herb Brooks Arena in Lake Placid, N.Y. to win their first ever Whitelaw Cup.

“Our senior class is out of this world right now,” Quinnipiac senior captain Soren Jonzzon said. “We’ve had four years of really strong, great teams. To finally come away with [a Whitelaw Cup], it’s unbelievable.”

After nearly twenty minutes of scoreless play to start the game, the Bobcats got a five-minute power play with nine seconds left in the opening period after Harvard’s Luke Esposito railed Quinnipiac’s Sam Anas headfirst into the boards. The trainers looked at Anas after he skated to the bench on his own power and he did not return to the game.

“The guys, they were mad. You know, big hit, it’s a part of hockey,” Quinnipiac head coach Rand Pecknold said. “For us, it was more about getting focused. Sam was done and we had to move on.”

Despite leaving the Bobcats without its First Team All-ECAC forward, the hit became the turning point that brought them their first ECAC Tournament Championship.

“One of the biggest strengths on our team is our depth,” Jonzzon said. “We scored 15 goals against Cornell last weekend from 11 different guys. Obviously, Sam is a huge part of our team, but we get scoring from every single guy on every single night. So we just talked about our depth and if everyone steps up a little bit, we’ll make up for it.”

Tim Clifton put the Bobcats on the board 1:11 into the period as he beat Harvard goaltender Merrick Madsen to his short side for his 18th goal of the season.

The Bobcats struck again shortly after. Landon Smith shot the puck from the inside edge of the right faceoff circle and it deflected off Bo Pieper at 3:02 into the second period for his fifth goal of the season.

Even after two goals on the five-minute power play, Quinnipiac was not finished scoring on a man advantage. The Bobcats scored their third power-play goal of the night after Adam Baughman went to the Crimson’s box for holding. K.J. Tiefenwerth scooped up a rebound and lifted it into the net to put Quinnipiac up 3-0 with 12:40 left in the period.

The 3-for-6 night on the power play brought Quinnipiac to 27.5 percent on the season, the fifth-best percentage in the nation. Connor Clifton, who was named Most Outstanding Player of the tournament as he tallied nine points in the team’s five postseason games, said the team has had a strong mentality on the power play throughout the season.

“We have one of the best [power plays] in the country right now,” Clifton said. “We put an emphasis on getting pucks to the net, track it to the net, getting bodies to the net. If [the goalie] can’t make the save, get the rebounds.”

Like the previous matchup between these two teams, a game in which Quinnipiac scored four goals in the first period before Harvard scored four unanswered, the Crimson countered. Ryan Donato picked a pass on the ensuing faceoff, took it down the ice and went bar-down to beat Quinnipiac goalie Michael Garteig eight seconds after Tiefenwerth’s goal.

That goal was the only blemish on Garteig’s night as he made 24 saves and was named to the ECAC All-Tournament Team. Harvard’s Kyle Criscuolo, who netted the game-winning goal in its 2-1 Semifinal win over St. Lawrence on Friday, said the team has struggled against Garteig all season.

“He’s a good goalie,” Criscuolo said. “We haven’t able to put many on him this year.”

Quinnipiac also held Jimmy Vesey, the ECAC Player of the Year, scoreless. The 2014-2015 East CCM First Team All-American only accounted for two assists, one of which came on a 6-on-3 opportunity on Nov. 13, over three games against the Bobcats.

“We know they’re a talented team,” Clifton said. “We have to take away their time and space. If they don’t have time and space, they won’t make plays like they usually would.”

Scott Davidson put in the only goal of the third period with an empty-netter that cemented the final score at 4-1.

“I thought it was a phenomenal effort,” Pecknold said. “At times, we got a little chaotic. It wasn’t the greatest thing on the planet, but our battle level was phenomenal.”

Quinnipiac will find out its opponent for the NCAA Tournament Sunday afternoon. Pecknold said he is unsure of Anas’ availability for the coming weekend, but said the team will enjoy its historic victory before looking ahead.

“It’s a great group of young men that battled and deserved what we got tonight,” Pecknold said. “We’re proud of them. It’s exciting to win a Whitelaw Cup. We’ll enjoy it here for a couple of hours and get ready to move on.