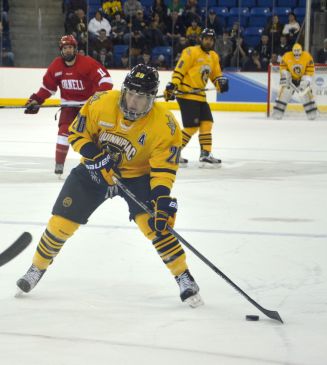 The last time Quinnipiac’s men’s ice hockey team faced Cornell in the ECAC Hockey Tournament Quarterfinals back in 2013, Kevin Bui scored a double-overtime goal in Game 3 at High Point Solutions Arena to propel the Bobcats into the Semifinals.

On Sunday, No. 1 Quinnipiac and No. 8 Cornell met for a Game 3 in Hamden once again with a trip to the conference semifinals on the line. The Bobcats finished this game in 60 minutes as they trounced the Big Red 6-3 to earn their fourth straight place in the ECAC Hockey Tournament Semifinals.

“Our team played hard. We had a good start to the game tonight,” Quinnipiac associate head coach Bill Riga said. “We got ahead and never gave that up.”

For the second straight night, the Bobcats scored on their first shot. This time, Scott Davidson took a wraparound and slid it between Cornell goaltender Mitch Gillam’s legs 1:10 into the game.

Quinnipiac struck 31 seconds later to double its lead. Bo Pieper lifted a backhanded rebound past Gillam to give the Bobcats a 2-0 lead in the first two minutes.

“[With the way] the game ended yesterday, it was nice that we came out really fast, got the momentum back and kind of took a little bit of wind out of their sails,” Quinnipiac captain Soren Jonzzon said.

However, as it did when Quinnipiac got out to a two-goal first period lead in Game 2, Cornell countered. Matt Buckles found the puck in a crowded crease and put home his second goal in as many days to make the score 2-1 with 15:48 left in the opening period.

Bo Pieper opened the second period scoring just 2:45 after the intermission. K.J. Tiefenwerth passed the puck to Tanner MacMaster at the right side of the goal. MacMaster then sent it across the crease to Pieper, who nearly whiffed on the puck but got enough of it to put Quinnipiac up 3-1.

The Bobcats tacked on its second goal of the period on the power play. Jared Fiegl was called for high sticking and created the Quinnipiac advantage. Andrew Taverner put home his fifth goal of the season with 3:46 left in the period to give the Bobcats the three-goal lead.

Fiegl found his way back to the penalty box after getting called for goaltender interference. The Bobcats capitalized on the power play again with :27 left in the period as Sam Anas slid the puck five-hole through a sliding Gillam for his 22nd goal of the season.

“It was just a big goal before the end of the period,” Anas said. “There’s a big difference going into the third period up 4-1 and 5-1. The power play was big for us, so it was just good momentum for the third period.”

Anas, who had not scored since Feb. 12, tied Chris Cerrella (’01) for third in program goals at the Division-I level (67). The junior trails only Brandon Wong (68) and David Marshall (73) on that list.

“I thought today [Anas] was, overall, decent,” Riga said. “But [he was] able to make those special plays that he makes to help us win games.”

Cornell scored two goals in the third period while Travis St. Denis scored a 200-foot empty-net goal for Quinnipiac to bring the game to its 6-3 final.

With the win, the Bobcats advance to the ECAC Hockey Championship Semifinals, where they will play No. 7 Dartmouth in Lake Placid, N.Y. at 4:06 p.m. on Friday. The Bobcats won both matchups against Dartmouth this season, the more recent being a 7-5 come-from-behind win in Hanover N.H.

“Hopefully we’ll have a better start than that game,” Anas said. “I think our true colors showed in the end and hopefully we’ll bring that from the start in this game.”

Although this is Quinnipiac’s fourth straight appearance time making it past the tournament quarterfinals, the team has yet to win a Whitelaw Cup, the trophy awarded to the winner of the ECAC Hockey Tournament. Riga said that the team’s upperclassmen are tired of coming back from Lake Placid without any hardware.

“I know everything is great with the Cleary Cup and it’s awesome to win the league and get the No. 1 seed, but that’s something that kind of aches in the belly,” Riga said. “I think it burns a little bit and we all want to get that done.”