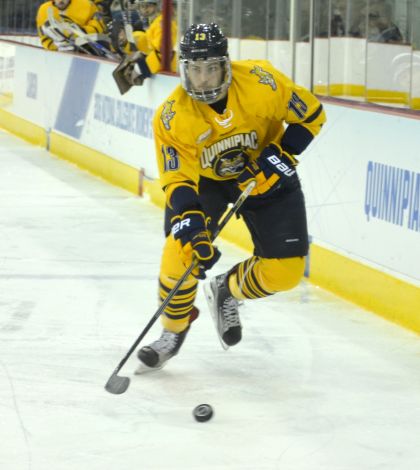 Top-seeded Quinnipiac men’s ice hockey came into Saturday night’s ECAC Hockey Tournament Quarterfinals game with a 1-0 series lead over No. 8 Cornell and a chance to sweep the series to advance to the tournament’s semifinals.

Advancing past the quarterfinals has not been a problem for Quinnipiac in recent years, as it has advanced to the semifinals in each of the last three seasons. However, the Bobcats only swept one of those quarterfinals series and came into Saturday just 2-3 in Game 2’s following a Game 1 victory.

The Bobcats were unable to sweep their quarterfinals series again as the Big Red won game two 5-4 behind a four-goal second period and Trevor Yates’ game-winning goal in the third.

“I thought Cornell was really good tonight,” Quinnipiac head coach Rand Pecknold said. “They competed. They battled. Their season was on the line and they were better than us.”

The Big Red held the Bobcats without a shot for the first 13 minutes of Saturday’s contest. Chase Priskie took Quinnipiac’s first shot on net with 6:13 left in the period and wristed a shot over Cornell goalie Mitch Gillam for the game’s first goal.

Less than a minute later, Tommy Schutt, Tanner MacMaster and K.J. Tiefenwerth led a three-on-one rush. The trio worked in some back-and-forth passing before Schutt took a shot and cleaned up his own rebound to put the Bobcats up 2-0 with 5:42 left in the first.

The No. 1 Bobcats entered Saturday’s contest 16-0-2 in games where they led after the first period. Yet, Quinnipiac captain Soren Jonzzon said it was the two-goal lead that led to the team’s second period struggles.

“I think that we were relaxed after the first period, being up two goals. We didn’t have a great period, but, having a two-goal lead, you get kind of comfortable,” Jonzzon said. “I think that complacency kind of crept up in our game and [Cornell] reloaded while we kind of took a step back. With the combination of the two, they just took it to us.”

Cornell struck back within the first minute of the second period as Mitch Vanderlaan wristed a shot past Quinnipiac goalie Michael Garteig to make it a 2-1 game.

The Bobcats took a 3-1 lead with 12:46 as Tiefenwerth found the puck resting between a number of players in front of the crease and slammed it home while falling forward.

Cornell tied the game with consecutive goals. Jeff Kubiak poked in a puck from the right side to make it 3-2 with 11:48 left in the period. Matt Buckles tied the game for the Big Red from the same spot after a deflection prevented Garteig from clearing the puck.

An unsportsmanlike conduct penalty on Cornell’s Weidner and a roughing penalty on Garteig made it four-on-four play for the ensuing faceoff. Schutt led a charge during the four-on-four play and left a pass for Priskie, who wristed a shot over Gillam’s nearside shoulder for his second goal of the game with 8:28 left in the period.

Cornell tied the game 4-4 shortly after. Christian Hilbrich used a toe drag from behind the net across the red line on Garteig’s left before beating him low to the far side.

“We weren’t getting breaks. Finally we’d get a goal and we were like, ‘Okay, now it’s going our way. Now we’ll start getting breaks.,’” Jonzzon said. “And then they’d throw it right back down our throats. It’s definitely frustrating.”

Cornell took its first and final lead just 5:44 into the third period. Trevor Yates controlled a pass with his skate and immediately wristed a shot into the top-left corner of the net.

Quinnipiac applied pressure late in the game, outshooting Cornell 11-5 in the period. However, Gillam held firm, as the Bobcats were unable to equalize the game.

“I just think, as a 20-man unit, we weren’t going,” Priskie said. “Things weren’t clicking. We have to have everyone on board to win games and especially sweep a series and end a team’s season.”

With the loss, the series will move onto a third game at the High Point Solutions Arena at 4:00 p.m. on Sunday.

“It’s a resilient group,” Pecknold said. “We’ll be back tomorrow. We’ll be ready to go.”