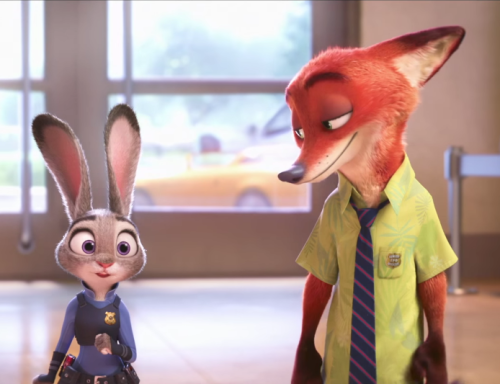 Another Disney movie with talking animals? Count me in. As a Disney-obsessed man-child, I’ve been waiting to see “Zootopia” ever since the moviemakers released the hilariously accurate clip of a DMV being run by sloths. Though I enjoyed that clip, I was not anticipating that this movie would be so great. What could have been a simple kids movie about silly animals, is actually a profound fable that conveys a relevant message on prejudice.

“Zootopia” follows Judy Hopps, a rabbit police officer investigating the disappearances of multiple animals in her city. Along the way, she acquires the help of Nick Wilde, a con-artist fox. The back-and-forth between these characters is great. Judy, as the energetic idealist, and Nick, as the sly realist, create a friction that is both entertaining and believable. If it weren’t for Flash, a loveably languid sloth at the aforementioned DMV, these characters would have been my favorite.

Going back to the story, the noir mystery was actually somewhat unpredictable, at least through the first half. There are multiple suspects, red herrings and reveals that keep you invested through the entire runtime. And it is done well enough so that when the villainous mastermind comes forward, the twist is appropriate even though some may be able to anticipate it.

The creatively designed city of “Zootopia” is another highlight. Instead of using a typical metropolitan background, the environment reflects the animals that live in it. There’s a desert district, an arctic district, there’s even a miniature district for rodents. The attention to detail is reflective of the incredible amount of effort used in fleshing out the world.

The best part, however, was the central theme of prejudice and how fear is used to separate us from those who are different. From Judy’s slight wariness in befriending a fox to the media contorting the public’s opinion on certain animals, it was an unexpected and bold concept, especially for a kid’s movie, but it fit in extremely well.

If I had to nitpick, I’d say that some of the humor and references, including a quick nod to “Breaking Bad,” might go over kids’ heads. But that doesn’t matter, since the movie provides more than enough entertainment for little ones, and most college students reading this don’t have kids. For Disney fans, this is a must-see movie that continues the studio’s recent winning streak of animated features.
Rating: ⅘