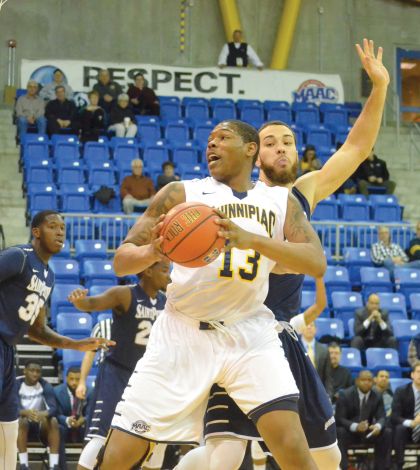 For the second year in a row, Quinnipiac men’s basketball failed to get past the first round in the Metro Atlantic Athletic Conference tournament following Thursday night’s 60-57 loss to Rider at the Times Union Center in Albany.

This was a transition year, a year Moore used to bridge the gap from one competitive Quinnipiac team to the next. If that was the plan all along, then Quinnipiac can be a dangerous team next year.

Before the season, the Bobcats were picked to finished No. 7 of 11 teams in the MAAC Coaches’ Preseason Poll. Quinnipiac finished No. 9 in the conference with a 9-21 record (6-14 MAAC) in the regular season, the worst record Quinnipiac head coach Tom Moore has had in his nine seasons at the helm of the program. The 2015-16 season marks the first time the program finished with a record below .500 since the 2012-13 season.

Many expected this team to struggle after former seniors Zaid Hearst, Evan Conti, Ousmane Drame and Justin Harris graduated and moved on to play professionally overseas, and because  juniors Kasim Chandler and A.J. Sumbry transferred to different programs.

What was left on the 2015-16 roster was an abundance of freshmen and sophomores, one Quinnipiac four-year senior and a couple junior-college transfers. The Bobcats were inexperienced and it showed throughout the season.

Seven of Quinnipiac’s 21 losses were by five points or fewer, including Thursday’s loss to Rider, proving that the Bobcats struggled closing games.

With 1:23 remaining in Thursday’s game, the Bobcats trailed 57-50. A desperate Quinnipiac team was able to cut the deficit to one point with the chance to take the lead after it forced a Rider turnover with 14 seconds remaining. On the ensuing possession, sophomore guard Dimitri Floras turned the ball over and ultimately ended the Bobcats season.

With Quinnipiac losing in the MAAC tournament, it surely won’t qualify for the NCAA tournament, let alone any other postseason play. But this was expected. This team wasn’t built to contend; they were too inexperienced. Before Thursday night’s loss, the team had a combined 17 career postseason points, nine of which came from senior guard James Ford Jr.

The Bobcats will be losing James Ford Jr. and Will Simonton to graduation. The two combined for 8.9 points per game. And while their impact on the court will be missed, this year’s senior class is far less of a loss than last year’s, which averaged close to 55 points per game combined.

The big question is if Quinnipiac will have Giovanni McLean next season. McLean is currently waiting to know if he will be granted a sixth season of eligibility from the NCAA, as he was forced to sit out the 2014-2015 season due to transcript fraud from his previous junior college. As a senior this year, McLean led the Bobcats in scoring (12.9 ppg) and assists (3.3 apg).

Other than McLean, no Quinnipiac player finished in the MAAC’s top 30 scorers. If the Bobcats hope to be successful, they will need to establish another go-to player on the perimeter.

Rising senior guard Daniel Harris showed that he could score from beyond the arc, averaging 10.2 points per game while shooting close to 41 percent from the three-point line.

The trio of Ayron Hutton, Dimitri Floras and Andrew Robinson averaged a combined total of 11 points per game and struggled with shooting consistency, so they aren’t really candidates to join McLean as his head backcourt running mate. Instead, the job might be given to an incoming freshman.

Mikey Dixon, who verbally committed to Quinnipiac in October, is a guard who can do it all on the floor and can be the perfect complement to McLean. According to MaxPreps, Dixon is currently averaging 26.4 points per game and shot 43 percent from the three-point line for his varsity career, which would immensely help the Bobcats who finished eighth in the conference in three-point percentage at 34 percent.

Dixon’s game would allow Quinnipiac to space the floor, allow McLean to operate around the perimeter and allow the bigs to dominate down low.

The Bobcats’ bigs were the heart and soul of the team. Quinnipiac relied on the trio of Chaise Daniels, Donovan Smith and Abdulai Bundu to win games.

Daniels made a major jump from his freshman year to his sophomore campaign. As a freshman, Daniels averaged 3.2 points and 2.7 rebounds per game. But during his sophomore season, he averaged 9.8 points and 6.2 points per game. Daniels flashed it in spurts as he finished his last seven games of the season scoring in double figures, which included a career-high 28 point effort against Fairfield.

Daniels also makes his impact felt on the defensive end, as he averaged 1.7 blocks per game, which was good for fourth in the conference. His frontcourt partner Smith finished third at 1.8 blocks per game.

While those number were expected, the surprise of the season came from Bundu. The freshman forward was able to play his way into the starting lineup and produced when given time. Bundu averaged 7.4 points per game and led the team in rebounding with 6.6 rebounds per game. Bundu’s relentless energy on the glass proved worthwhile as he led the MAAC in offensive rebounds per game with 3.5.

This is a young team and a team that everyone will get used to.

And if defense wins championships, Quinnipiac will be all right in the future.

With a young roster that is gaining chemistry, things will get better before they get worse.