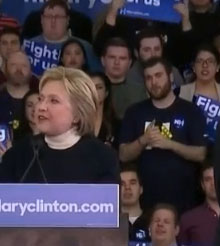 This summer, students will have the opportunity to take six credits of summer courses at the 2016 national political party conventions.

During the first week, students will be able to watch and participate in decorating the convention hall, setting up media offices and completing the podium.

Faculty leaders of the program will instruct students on topics including an introduction of the convention host city, the history of political campaigns, the nomination process, campaign finance and media coverage.

The second week of the program focuses on the keynote addresses, party platforms, party factions and selection of the presidential and vice-presidential nominees.

Scott McLean, a political science professor, has been taking students to the political conventions through The Washington Center since 2000.

“I really enjoy spending time with the students and seeing them have an exciting experience that really opens their eyes and gets them more engaged and aware of what’s happening in American politics,” McLean said.

McLean said the program is a great opportunity for students to learn networking skills and open doors for future internships and jobs.

“They run into people who are hiring, businesses, consultants, lobbyists, members of Congress,” McLean said.

The seminars include a combination of formal instruction, guest lectures, panels, site visits and fieldwork assignments in order for students to have a fully immersive experience.

Molly Halper, a sophomore political science major, will be attending the Republican National Convention from July 10 to July 22.

“I’m only gonna be in college for one of these conventions, obviously, so I might as well take the opportunity,” Halper said.

Harper said she hopes to meet well-connected professionals and learn more about the political party she is registered to.

After students return from the conventions, the class will meet three times for a reflection and discussion of everyone’s experiences. Students will be required to complete a research paper, attend a live viewing of one of the fall presidential debates and write an analysis paper.

McLean said in the past, students came back from the political conventions much more excited about the process of electing a new president and more knowledgeable of what the rules are and why they are important.

“I also think that they become much more appreciative and aware of what changes are occurring in political parties; how they’re not the same kinds of institutions they would have been 50 years ago,” McLean said.

Every four years when the conventions are held, between 10 and 20 Quinnipiac students attend. In the past, students had the chance to work in the green room of media outlets like CNN and meet well-known political figures.

“You’re going to be there to see history being made,” McLean said.

If students are unable to attend the political party conventions this summer, but would like to learn more about the presidential election, a “Political Communication” course is being offered during the fall semester.

This course looks at the conventions, as well as the media coverage, social media strategies, policy issues and key voting demographics.

Over the course of the semester, students enrolled in the class manage a campaign coverage blog and live tweet the debates.