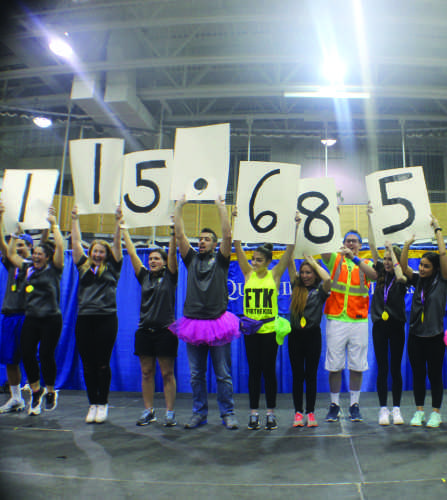 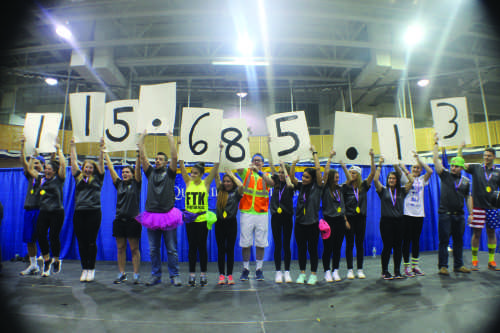 The fifth annual QTHON broke Quinnipiac records Saturday night when students raised $115,685.13 for the Children’s Miracle Network (CMN) and the Connecticut Children’s Medical Center (CCMC). This is more than double what the dance marathon raised last year and surpassed the organizers’ goal of $75,000.

More than 900 participants in the event danced “for the kids” over the course of seven hours, promising not to sit until the time was up. Mirroring their commitment, almost all of them wore shirts saying, “Too legit to sit.”

Walking into the Recreation Center at Mount Carmel on March 5, there was a stage to the right, in between the DJ tables and the giant inflatable Bobcat head. Further on, there were vendors, a food stand, a raffle booth and activities such as crafts and giant Jenga. There were people on the dance floor wearing the slogan shirts: white for dancers, red for volunteers, yellow for the kids (known as family ambassadors) and neon green for morale.

Morale was the section of QTHON intended to keep people dancing and excited. These team members were sometimes in costume. One member of morale was junior Bradley Groleau, who sported a bee-themed outfit, with a black and yellow tutu and flower antennae. Groleau said he’s known among the kids as the one who dresses up “ridiculously” at QTHON. One kid requested Groleau dress up as a ballerina next year.

“It feels great because you definitely see [the joy] on their faces,” he said. “When they see you, they light up. They’re just here to have fun and dance.”

The Morale Crew led some of the dancing during the night on stage. Groleau said his favorite move in the “Morale Dance” was the arm movements to accompany the Taylor Swift song “Wildest Dreams.” The dancers themselves kept in time to the moves, as if they were a flash mob.

There was a wide variety of music that night, from “Shut Up and Dance” and “Hotline Bling,” to the “Friends” theme song. One of the DJs, sophomore Anthony Polo, said there were themes for each hour of the night, like “Chart-Toppers,” “Broadway” and even an hour for Disney songs.

However, dancing wasn’t the only focus of the night. During the night, speakers would come on stage, and the dancers would get on their knees to show attention. Many of the speakers were families the students were helping. One of those who spoke was Shemar Williams, who was diagnosed with scoliosis before birth, according to the CCMC website.

During his speech, Williams thanked the hospital for its care.

“They have the best staff ever,” Williams said. “They make this journey tolerable.”

Williams and his family have been attending QTHON since the first one in 2011. His mother, Lorraine Williams, was enthusiastic about the event’s growth over the five years.

“Oh my God. It’s a huge difference,” she said. “I remember when we started [attending], I don’t think it was even this big. It was in a smaller space, and it’s now so large.”

QTHON is one of many dance marathons sponsored by the CMN. It is a multinational organization that helps local member hospitals through fundraising, including getting support from corporations like Dairy Queen and Walmart, according to Scott Organek, CMN director at CCMC. The first of these dance marathons was held in 1991 at Indiana University to honor a child who was a victim of AIDS, according to the CMN website.

This year marked a notable change for the event, as the university recognized QTHON as an official organization on campus. For the first two years, the fraternity Delta Tau Delta ran the event. And for two years after, the event was run by the Quinnipiac student body.

“Being our own organization now, we get funded by the Student Government Association,” junior and Co-Director of QTHON Chris Diaz said. “And we also get to welcome more and more people in. It’s not just a Greek life event anymore.”

An event the size of QTHON takes time to prepare. The 16 members of the managing team are selected nearly a year in advance in April, and preparations continue into the summer and throughout the school year, according to Diaz.

Toward the end of the night, everyone in the Recreation Center was told to join hands and make a circle around the room, while the kids and the QTHON team formed huddles in the center. This was “The Circle of Hope,” and is intended to help students see their impact. The kids went around the circle, cutting off the hospital bands that participants were instructed to wear for the night, accompanied by the John Mayer song “Waiting on the World to Change.”

After that, people rushed the stage for the announcement of the night’s total. The crowd eagerly awaited, making noise and getting their cellphones in position. The numbers were revealed on posters from right to left.

Everyone cheered when students held up the posters suggesting the event raised $15,685.13. However, the crowd erupted when the team revealed the extra No. 1 hidden under the dollar sign. QTHON raised $115,685.13 that night. Some jumped and cheered and others chanted “FTK,” which means “for the kids.” A few even started crying tears of joy. To put it in perspective, the goal for the evening was $75,000.

Diaz was pleased with the result.

“[Saturday] night is undoubtedly the best night of my college career thus far. $115,685.13 will change a child’s life someday, and I don’t think there could have been a better ending to the night,” he said in an email.

Ian McCracken, a senior and QTHON’s Catering Chair, was blown away at what happened.

“[This is] unlike anything I’ve felt before,” he said. “It’s too far for even the ability to cry to take place, at least for me. It’s been an unbelievable ride ever since the beginning… getting this position, all the way to the reveal. It’s been nothing short of spectacular.”

Most of the proceeds from the night’s’ events were for CCMC, which is the CMN member hospital in Connecticut. It is a nonprofit that will treat any child, regardless of ability to pay, according to Organek.

“We had over 300,000 patient visits last year…we can’t be there to treat those kids without events like [QTHON] happening,” he said.