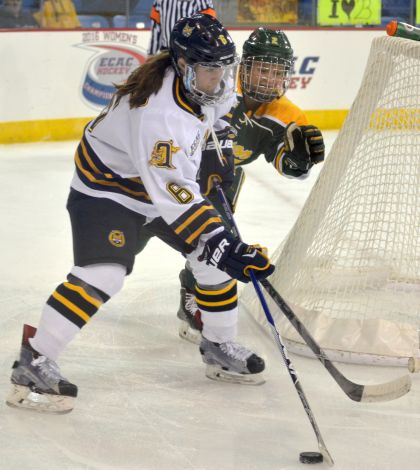 Winning the tournament championship adds to the long list of accomplishments Quinnipiac first-year head coach Cassandra Turner made in 2016. The Bobcats’ 30 wins this season are the most in program history, and an NCAA record for most wins by a coach in their debut season.

“Our team battled so hard. Clarkson is such a good hockey team. They are big, strong and physical and took a lot of pucks to our net,” Turner said. “We had a great desperation about the way we played, but with a level of composure at the same time. It is what we talked about going into this game, and I couldn’t be happier to share this with this group of players and our staff.”

The first period started out all Clarkson, as the Golden Knights registered the first three attempts on net over the first five minutes of the game. However, Quinnipiac goalie Sydney Rossman continued to showcase why she was named ECAC Goaltender of the year, turning away all of Clarkson’s first period shots and 16 shots overall.

While both team’s were unsuccessful on the powerplay in the first period, the Bobcats’ offense capitalized before its conclusion. Nicole Brown put a rebound past Clarkson goalie Shea Tiley following a Nicole Connery shot. The goal put the Bobcats up 1-0 and was Brown’s eighth goal of the season.

The assist moved Connery into a tie for the team lead with 24 and was her 37th point of the year. The secondary assist also gave captain Cydney Roesler her ninth assist of the season. 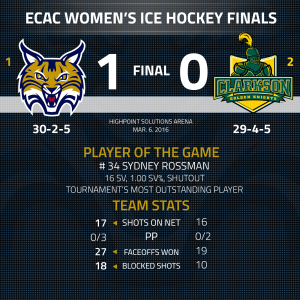 During the second, both teams came out with intensity on both ends of the ice. The emotions reached a boiling point in the third, as an interference call on Clarkson’s Erin Ambrose caused T.T. Cianfarano and Emma Woods to need to be restrained by teammates.

Despite the brief flair in temper, Turner described how proud she was that her team was able to maintain composure.

“I talked to them about it, but I almost didn’t need to,” Turner said. “It was amazing to see the body language of our kids, and how they weren’t going to get involved in something like that. They knew that was going to be really important, and they were really disciplined.”

With her 16-save shutout in the championship game, Rossman set the Quinnipiac program record for shutouts in a season with 18.

Following the contest, Rossman was named the Most Outstanding Player of the Tournament, as well as the goalie for the All-Tournament team to accompany her ECAC Goalie of the Season honors.

“You don’t win championships without a great goalie, and she has been the rock for us. Whenever we have needed her, she has been there for us,” Turner said. “She was outstanding today and it wasn’t surprising to me because she really is a mentally strong goaltender, and it really showed today.”

Rossman credited her teammates for helping her reach these levels of success.

“Without them, none of those awards would have been possible,” Rossman said. “So while [the accolades] may be great, we still do have work to do.”

Joining Rossman on the All-Tournament team are Brown, Connery, and Emma Greco.

“[Brown and Connery] have been building every single year that they have been at Quinnipiac,” Turner said. “Just when I think they have hit a plateau, they find something else to get better at. I was so impressed this weekend with the decisions they made with the puck.”

The Bobcats’ win in the finals also marks the first time that the hosting team of the ECAC tournament has won since Cornell accomplished it in 2013.

With the ECAC title secured, Quinnipiac will now set its sights on the NCAA Tournament. The Bobcats will enter the tournament as the No. 4 overall seed, and will host Clarkson again in the first round on Mar. 12 at 2 p.m.