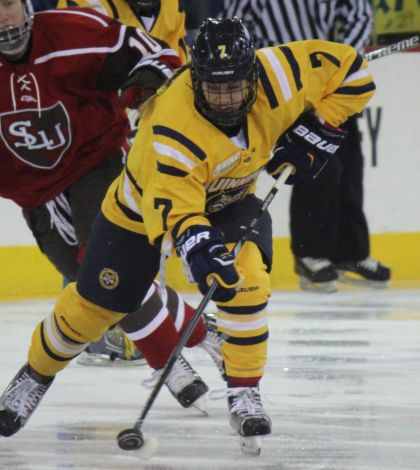 For the first time in program history, Quinnipiac women’s ice hockey is heading to the ECAC tournament championship game. Behind a late goal from freshman Randi Marcon, the Bobcats earned their place in the finals on Saturday, topping the St. Lawrence Saints 2-1 at the High Point Solutions Arena in Hamden.

Both teams came out firing from the opening puck drop, as the Saints attempted more shots on Quinnipiac goalie Sydney Rossman through two periods than RPI had registered in both games of the quarterfinals the previous weekend. 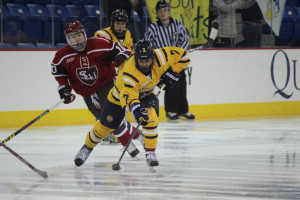 But Rossman stopped the Saints first 18 attempts on goal, and 20 shots overall.

The Bobcats broke through first, as Emma Greco wristed her second goal of the season past St. Lawrence goalie Grace Harrison.

“Emma Woods was skating through the middle, but I decided to not pass to her and keep going,” Greco explained. “I tried to put it between the seam of the two defense, and when I shot it I saw it soar into the top corner.”

Despite trailing the Saints kept fighting, and leveled the score as Hannah Miller put one past Rossman 25 seconds into the third period.

Still, Quinnipiac head coach Cassandra Turner was confident in her team’s ability to win the game.

“It has been a process. We have had moments all year that we have needed to learn from,” Turner said. “I had a good feeling about the game when I saw the look on my players faces, and how they remained calm.”

While Harrison did her most to keep the Saints in the game, making eight saves in the third period and 26 saves overall, Turner’s confidence in her team would be rewarded.

With 5:50 left in the game, Marcon scored off a rebound and sent the Bobcats into their first conference championship game.

With their place in the finals now secured, the top-seeded Bobcats will look to become the first team to win the ECAC tournament since Cornell in 2013. To accomplish this, they will have a matchup with rival Clarkson, the tournament’s No. 2 seed.

These two teams have faced off twice this year, with the Bobcats winning the first matchup 3-0 on the road and the teams tying 2-2 in the second contest. The final is set to take place Sunday at 2 p.m at the High Point Solutions Arena in Hamden.