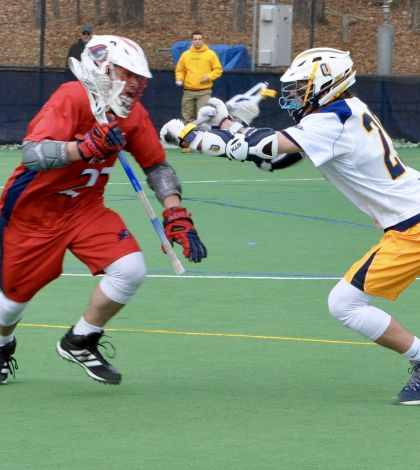 Quinnipiac men’s lacrosse (2-1) needed to overcome an early deficit before winning 9-7 at home on Saturday afternoon against the New Jersey Institute of Technology Highlanders, who have yet to win a game in program history.

After the Bobcats took an early 1-0 lead, the Highlanders scored four straight to go up 4-1 with 9:06 left in the second quarter. 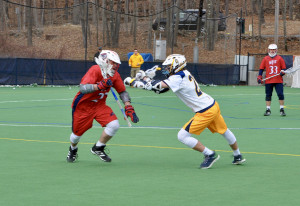 Quinnipiac head coach Eric Fekete said there was no need to be worried about being down so early in the game.

“We don’t really worry too much about the score until we’re down to the last five or six minutes unless there’s some crazy variable,” Fekete said.

The Bobcats then scored three straight goals in a span of 3:04 to tie the game at four. Junior midfielder Kevin Diehl, senior attacker Ryan Keenan, and sophomore attacker Brian Feldman each scored for the Bobcats during the span.

Feldman was confident that his team would come back from the early deficit.

“We were getting a little nervous about it,” Feldman said. “We had to fight through adversity. They haven’t won a game yet in their entire two seasons so far and we knew that coming in, I think we underestimated them a little bit. But I knew in the end we would come out bigger, faster, and stronger.”

Quinnipiac senior midfielder Connor Meth assisted on two of the goals during the span and finished the game with three assists.

Sophomore Jesse Rice then scored his second goal of the game to put the Highlanders up one, but the Bobcats responded with another goal from Diel with just three seconds left in the first half to tie the game at five going into halftime.

Quinnipiac got another goal five minutes into the second half when Feldman scored his second of three goals, but the Highlanders scored again with 2:13 left in the third with a goal from sophomore attacker John Roach to tie it at six.

Feldman scored again with 8:24 left and Keenan added another Bobcat goal just 38 seconds later to give the Bobcats an 8-6 lead.

“We executed our plan well with our plays that we have put in and we got open and scored,” Feldman said on his three goals on Saturday.

Freshman attacker Aaron Forster scored with 4:30 left to cut the Bobcats lead to 8-7.

But with 1:03 left, freshman attacker Foster Cuomo scored an empty-net goal to ensure the win for Quinnipiac.

Fekete wasn’t too pleased with his team’s offensive performance on Saturday but is happy with the win.

“We could have shot the ball better,” Fekete said. “We had plenty of shots I thought (Marzullo) played pretty well. They did what they had to do to win today but we certainly need to play better in the big picture.”

Quinnipiac is back in action on Saturday, Mar. 12 when they travel to take on Hartford.