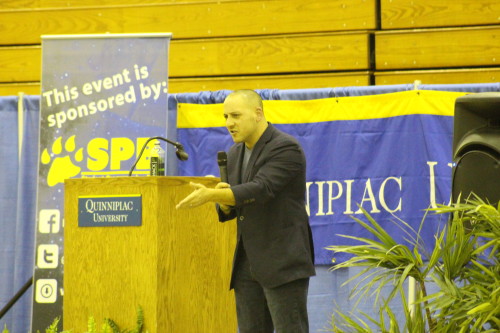 Kevin Hines tells students how he has struggled with mental illness.

Kevin Hines addressed a room of students and faculty on March 1 about his miraculous second chance at life after he attempted suicide by jumping off the Golden Gate Bridge. His attempt was a result of a mental illness he still deals with to this day.

“I felt like this is such a big issue today and this is something everyone needs to hear whether indirectly or directly, in some kind of way,” she said.

Hines revealed that when he was 17 years old, he was diagnosed with type 1 bipolar disorder, also known as manic depression or manic-depressive disorder. Hines described this type of disorder as having chronic highs and lows in behavior. The first symptom he exhibited was extreme paranoia.

“[Extreme paranoia was] the belief that everyone around me, in front of me, behind me, to the left or to the right was out to get me, out to hurt me, or trying to kill me,” he said. “The paranoia I experienced was so extreme, I started believing that the United States postal service workers had a plot for my assassination.”

Despite understanding that his behavior was unorthodox, Hines refused to open up to his family about it. Because of this, he quickly felt isolated and faced his illness alone with no positive progress. His mind would make him hallucinate by seeing imaginary figures picking on his vulnerability and spouting negative words at him.

”I found myself looking in the mirror and loathing every fiber of my being, hearing voices in my head because of my brain,” he said.

Eventually, Hines came to the conclusion that because of his illness, he was becoming a burden to all of his loved ones and decided that it was time for him to end his life.

“The pain became too great and I believed I had to die,” he said. “I never once wanted to die by suicide; [but] I believe I had to. I believed I was useless, I believed they hated me and wanted me to go. Now had I just asked them those questions, I would’ve known they were false realities.”

On Sep. 24, 2000, at 19 years old, Hines walked on the Golden Gate Bridge walkway, convinced that nobody cared about him. With that in mind, he jumped into the ocean in hopes that he would die on impact.

However, Hines recalled that once his hands left the rail of the bridge, it was an instant regret and he prayed to God that he would survive the fall.

In four seconds, Hines hit the water, but unlike the thousands of other people who attempted suicide off the Golden Gate Bridge, he survived.

He was trapped between the rough waves of the ocean and suffered extreme injuries, including being temporarily immobilized from the waist down. But a nearby coast guard spotted Hines in the water and rescued him. After being rescued and tended to by a hospital, he was sent to a psychiatric ward to help treat his disorder.

From then on, Hines attempted to improve his life by taking control of it and refusing to let his illness get the better of him again. Certain tips he shared with the audience included eating healthier foods, attending several kinds of therapies such as music or art therapy. Medication also benefited Hines’ mental state, but he stressed that this does not confirm that medication works for everyone with a mental illness.

Hines has attended about seven psychiatric wards since his suicide attempt. He challenges himself daily to be a better man from his experience and he now confides in his loved ones for when he is going through trouble.

“I developed a mental health emergency plan so that if I’m not self aware, they can see it,” Hines said. “As difficult as being locked away from people you love is, I’ll do it in a heartbeat if it means I’m going to stay alive.”

Freshman Naomi Robinson learned more that she expected from the seminar.

“He could’ve just talked about how he jumped off the bridge,” Robinson said. “But he talked about how that helped him become a better person. He took a negative experience and found the good in it. It was amazing. He’s a living image of somebody who actually tried to commit suicide and life chose him.”

Hines is currently an advocate for suicide prevention and an author of two books, “Through the Eyes of One?” and “Cracked not Broken.” He continues to share his story and remind people that mental illness can be just as powerful as a physical disease.

“I found myself pacing back and forth atop the Golden Gate Bridge walkway because of one thing: My brain. The single most powerful organ in all of our bodies and the largest and the one we neglect the most,” he said. “There’s no cure for what I have, but there is a way to fight it, to battle it day-by-day and to win that for the most part.”