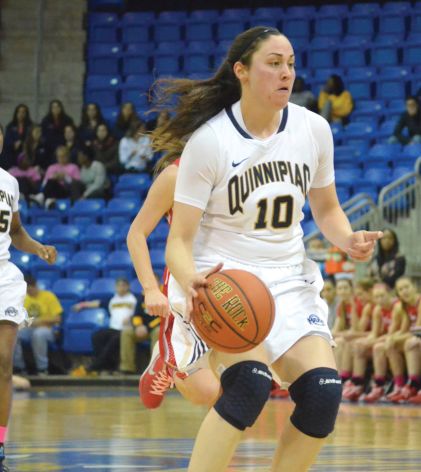 After winning three of their first four games to start the season, the Bobcats went on a slump in December and ended up going 2-6 over their next eight games.

Quinnipiac head coach Tricia Fabbri, who has coached the Bobcats for 21 seasons, believed her team had some growing pains to start the season.

“The season’s a marathon,” Fabbri said. “There was just too much to learn, too much to prove and the season was just so young and you just know that it’s just that from November to March that you’re going to get better.”

But the season took a change for the better following their win against Rider on Jan. 6. From that game on, the Bobcats did not lose another contest in the regular season and are now taking a 17-game winning streak into the MAAC tournament.

Senior guard Maria Napolitano, who leads the Bobcats in scoring with 11.1 points per game, said once everyone felt comfortable in their role, the team started to do better.

“I think a lot of it had to do with people figuring what roles they needed to play and just getting other people to get aggressive offensively,” Napolitano said. “It took some time for our offense to click and once that happened we got pretty hot,” Napolitano said.

“I think our freshmen built their confidence level throughout the season so that definitely has helped,” Martucci said. “They’re pretty much our main contributors to this team as well.”

One of the key freshmen that made an impact is forward Aryn McClure, who is the highest-rated recruit in Bobcat history. McClure said she trusts her teammates to guide her into postseason play.

“I’m relying on my seniors here to help me out and guide me because I don’t really know what to expect,” McClure said.

On offense, the Bobcats average 67.6 points per game, the most of any team in the MAAC heading into the postseason. On defense, Quinnipiac has given up 59.3 points per game. Fabbri believes this year’s team plays better defense than last year’s team.

“We were a better defensive club this year than last year,” Fabbri said. “We knew we were going to put ourselves to win every game because of how we defended.”

Because the Bobcats won the regular season MAAC championship, they will be the No. 1 seed in the MAAC tournament and will have a bye for the first round.

Quinnipiac first game of the tournament will be in the quarterfinal round on Friday and it will face the winner of the Thursday’s Rider-Canisius game.