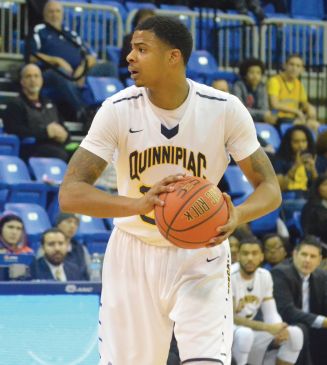 Quinnipiac men’s basketball is gearing up for the Metro Atlantic Athletic Tournament on Thursday in Albany, knowing full well what must be done, regardless of any late season fatigue or struggles.

“It’s put up or shut up,” senior guard James Ford Jr. said. “That adrenaline takes over and I don’t know if anyone really focuses on the point of being tired.”

The Bobcats are set to play as the No. 9 seed in the tournament, pinning them against No. 8 seeded Rider on Mar. 3, at the Times Union Center. Quinnipiac split the season series 1-1 with Rider and is 6-14 overall in the MAAC this year.

If Quinnipiac is able to win on Thursday, the Bobcats next stop is a contest against No. 1 Monmouth the following day.

“There is not a cockiness, certainly, because we have not won enough to be cocky,” Moore said. “But there is a belief that we don’t really fear anybody.”

Despite losing by a combined 29 points in their two matchups with Monmouth this season, the Bobcats left those games with a sense that they were on the same level as their opponent.

“Even the Monmouth game there, we were only down about six with five minutes to play,” Moore said.

After finishing its season with a 80-65 loss at Siena, Quinnipiac enters the tournament having lost seven of its last eight contests. During that stretch, the Bobcats have been outscored 604-525.

Although a three-game losing streak may play into the minds of other teams entering a playoff atmosphere, it isn’t something the underdog Bobcats hang their heads on.

“It’s 0 to 0 when you get into the tournament, just may the best man win,” senior Giovanni McLean said. “We’ve just gotta pull up our boots and go after it.”

In terms of what can be improved upon leading up to Thursday, the message is mostly offensive.

Quinnipiac hopes to have a better trip to Albany than last year, when the Bobcats lost to Marist in the first round of postseason play.

As important as this tournament is to the Bobcats’ season, sophomore forward Chaise Daniels’ confidence is held to no ceiling entering the postseason.

“We all believe,” Daniels said. “We all have the common goal to win the NCAA championship and we believe that it can be done.”