Acrobatics and tumbling wins with highest score of the season 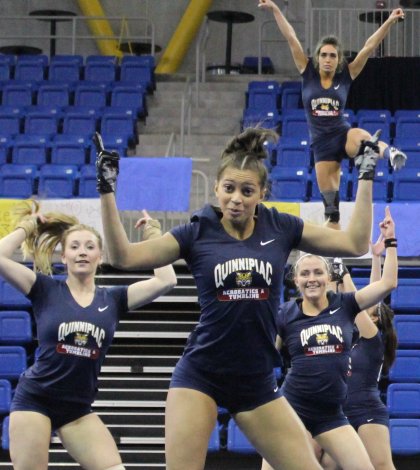 The Bobcats have won their last four meets in a row, however, none in more dominant fashion as the highest score of the season was totaled in today’s meet. 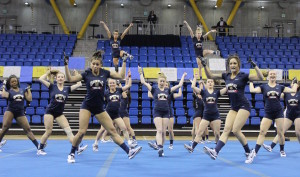 In the first Compulsory event, Quinnipiac edged Gannon to take an early lead, 38.80-36.30. The Bobcats swept all four of the acro, pyramid, toss and tumbling heats in this event.

The Pyramid event followed as the Bobcats were able to rally back and win two of the three heats, 29.70-29.65. Going into intermission, Quinnipiac just barely lead Gannon 96.55-95.40.

With three events left after the intermission, the Bobcats wasted no time picking right where they left off as they totaled 28.4 points to Gannon’s 24.95. Lead by freshman base Jenna Capristo, the synchronized heat scored the highest of each heat in this event with 9.65.

Powers praised Capristo’s major efforts although her experience at the collegiate level is limited.

“As a freshman it’s a lot,” Powers said. “She’s had a bit of a shoulder thing going on, and she just went for it anyway, she did a great job.”

Capristo and senior captain Taylor Johnson continued the Bobcats strong effort in the Tumbling event by scoring a season high (9.65) in their duo pass heat, then individually combined for 19.25 points in the aerial pass and 6-element pass events.

Going into the final team event, Quinnipiac was in the lead and refused to give it up. The Bobcats topped Gannon by a score of 100.82-89.26 in the final event to solidify a fourth-straight win.

Next up, Quinnipiac travels to Eugene, Ore. to take on the Oregon Ducks on Mar. 12, in hopes of extending its winning streak to five in a row.