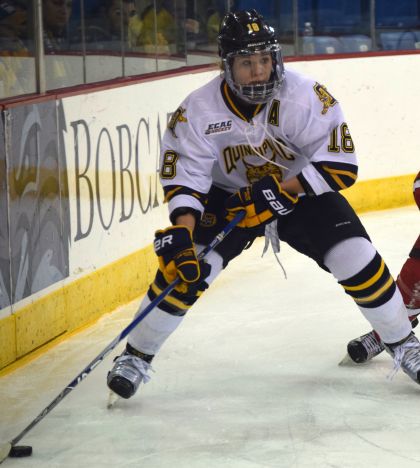 Following its thrilling 3-2 overtime victory on Friday afternoon, Quinnipiac women’s ice hockey played host to the RPI Engineers with a place in the ECAC semifinals on the line. In a hard fought effort, the Bobcats would secure their place in the semis by defeating the Engineers 2-1 in a double overtime classic. 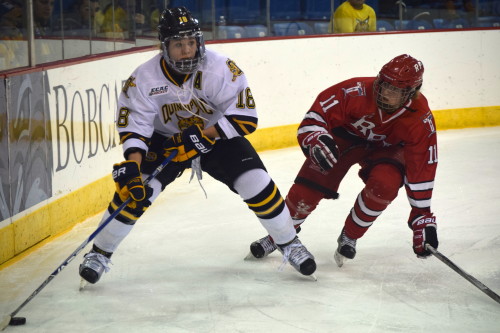 Following the game, Quinnipiac head coach Cassandra Turner detailed her pride in her team, and what they have accomplished.

“I am really impressed, and proud of our team. Their composure, their confidence. I couldn’t be happier to be coaching a group of people like the one we have now,” Turner said. “They were there for each other all day and they continued to pick each other up. It was a really neat game to be a part of.”

The Engineers came out firing early as Jaimie Grigsby scored her second goal of the weekend, and third goal of the season, 25 seconds into the contest to give RPI an early 1-0 lead.

The Bobcats offense responded in short order, as T.T Cianfarano wristed her 28th goal of the season home on a powerplay.

While the Bobcats created a few more close chances in the period, RPI goalie Lovisa Selander built on her impressive 57 save performance Friday, and stopped 66 shots on Saturday afternoon.

“We knew [Selander] was a good goalie going in, so we tried not to get frustrated,” Quinnipiac forward Brown said. “We attempted to keep the mindset of keep getting pucks on net and good things will happen.”

Both offenses remained stuck at 1-1 through the second and third period, so for consecutive nights overtime was needed to establish a victor.

Both teams went back and forth during the first overtime period, with the best chance coming when Selander stopped Cianfarano on a breakaway 10 minutes into the period.

With no team breaking through, the game headed to a second overtime. This was the first time the Bobcats have gone to double overtime since their 3-2 victory over St. Lawrence on Mar. 2, 2013.

In the second overtime, the momentum continued to swing in the Bobcats favor, as they outshot the Engineers 11-1 in the period.

The continued assault on Selander’s net finally paid off 13 minutes into the period, as Brown would finish her own rebound for her seventh goal of the year and the game winner.

“We could probably have played another overtime, but I thought we shouldn’t,” Brown said. “I was kinda tired of playing RPI, so it time to move on to next weekend.”

The win marks the Bobcats’ 28th of the season, and gives Turner the record for most wins for a rookie coach in NCAA history.

With their opponent yet to be decided and their place in the semifinals secured, the Bobcats will now begin to prepare for the semifinal round of the ECAC tournament. The semifinals will take place on Mar. 5 at the High Point Solutions Arena in Hamden.