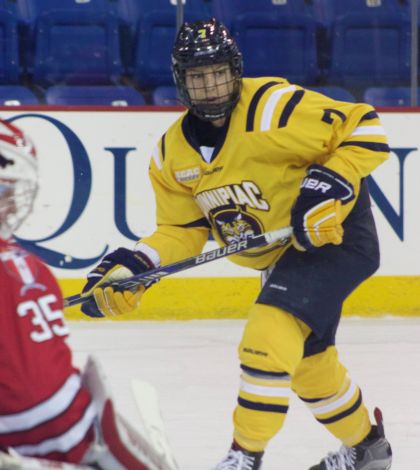 With its regular season concluded – and the ECAC regular season title clinched – Quinnipiac women’s ice hockey looked to carry its four-game unbeaten streak into the playoffs vs. RPI at High Point Solutions Arena. They would do so in thrilling fashion, defeating the Engineers 3-2 in overtime, despite trailing by 2 goals coming into the 3rd period.

The Bobcats’ offense looked ready to play early, outshooting RPI 20-2 in the first period. RPI still had a chance early on, however, due to a Quinnipiac tripping penalty.

However, Quinnipiac showed why it’s the No. 3 penalty killing team in the country this season, allowing RPI to only get off one shot during the two-minute stretch without scoring.

In the second period, the Bobcats increased their shots advantage to 36-5. However, the Engineers capitalized on their chance, as Jaimie Gribsby finished a one-on-one against Rossman with two minutes left in the period. Grigsby’s goal was the first allowed by the Bobcats in 164 consecutive minutes.

RPI struck one more time in the period, as a Josefine Hansen slapshot found its way over Rossman’s glove shoulder and into the back of the net with 30 seconds remaining in the second. It was the first time the Bobcats trailed by two goals since their loss to Colgate on Feb. 6.

“We’re a team that never gives up. We learned from [Colgate], where we were down two goals in a similar situation,” Quinnipiac senior forward Nicole Connery said. “Everyone was fired up, and people were staying positive. We learned from that how to stay in the right position mentally, and this time we used that to take it to them.”

The Bobcats continued to create chances from the start of the third period. Emma Woods struck first for Quinnipiac, recording her 10th goal of the season from a scrum that cut the Engineers lead down to 2-1. T.T. Cianfarano assisted the Woods goal, giving her a team-leading 49th point for the season (27 goals, 22 assists).

Quinnipiac then tied the game five seconds after RPI returned even strength 7:39 into the third period as Connery recorded her 13th goal of the season, and her seventh point (4g, 3a) in her last three games. Regulation ended with the game level at two each.

Quinnipiac’s breakthrough came two minutes into the extra period. Following a drive on net by Cianfarano, Woods, the puck deflected the rebound into the net in controversial manner, as it initially appeared to hit off her skate. Following a lengthy review and discussion by the referees, the goal was upheld.

“No doubt. No doubt,” Woods said. “I knew there was that [kicking] motion, and that it was going to be reviewed, but I was in stride and it happened so quickly that it wasn’t a force but I thought it was going to stand. Even if I was a little scared at first.”

The goal was Woods’ second of the night, as well as the game winner. The assist from Connery gave her the 100th point of her career.

“Connery every shift, with her unique skill level, always works hard,” Quinnipiac head coach Cassandra Turner said. “She and I had a conversation a couple years ago about ‘what would [Connery] want someone to say about you at the end of the game if they had never seen you play hockey before?’ and she has really made the things she wanted to be proud of a reality.”

Today’s win was the Bobcats’ 27th of the season which is a program record for wins in a season. Turner also tied the record for most wins by a rookie coach in NCAA history.

“I am really proud of this team. At the beginning of the year I knew this was possible for this group and that we could be sitting in this exact position we are now,” Turner said. “They’ve made it a reality and it is a testament to how hard they work, and how much they are willing to put into it.”

Following today’s victory, the Bobcats will look for a similar result when they face off against RPI again Saturday at 2 p.m at High Point Solutions Arena, with the chance to advance in the ECAC tournament on the line.