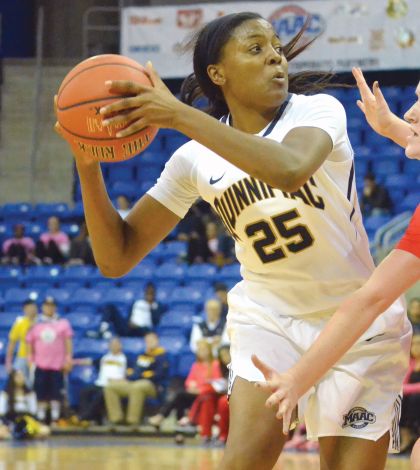 Quinnipiac women’s basketball headed into the 2015-16 season looking much different than the year before, when the Bobcats went undefeated in conference play.

With an influx of new faces and roles to be determined, freshman Aryn McClure took her opportunity and ran with it.

Ranked as the No. 264 overall prospect in the Class of 2019 by All Star Girls Report, McClure is the highest ranked player Quinnipiac has ever recruited. 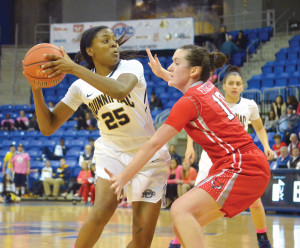 Her talent interested many other programs in the region, but McClure appreciated the sincerity Quinnipiac, specifically head coach Tricia Fabbri, delivered.

“I didn’t feel like it was a pitch,” McClure said. “They wanted me to be a part of their family and it was genuine.”

Family is important to McClure, as she still calls her parents after every game for their criticism.

“They can’t come to every game, but they watch online,” she said. “My dad still tells me what to do each game.”

Quinnipiac also demonstrated its interest in McClure by attending her summer league games throughout July and seven high school games, the maximum number of games the NCAA allows coaches to see.

“That’s as much as we could do to show her the love,” Fabbri said. “I followed her around to wherever she was. It’s almost like a stalking situation, maybe not a good word to use, but that’s what you’re doing. It almost gets to the point, where we say ‘she probably thinks we’re nuts.’”

Despite the attention she received from Quinnipiac, McClure’s expectations for her freshman year were low.

“Coming into the season, I didn’t expect to play at all,” she said. “I thought my season average playtime would be six to eight minutes. I thought this would be a year to learn about how to play college basketball.”

Except, that was not the case.

In her first 15 games, McClure played no fewer than 16 minutes, including a 38-minute performance against Florida Gulf Coast on Dec. 28, and is averaging 8.6 points per game.

“Aryn wasn’t alone because they were all pass-first players and it led to turnovers,” Fabbri said. “It led to us not being good offensively. We said, ‘You need to look at the rim and score.’ It’s hard to tell players to be a little selfish, but we needed her to be.”

With the message on repeat to put the ball in the basket, McClure scored 19 points in the following game, helping lead the Bobcats to 80-64 road win over Canisius on Jan. 8, and haven’t lost since.

“It was a bit of a transition,” McClure said. “I’m a pass-first player. I’d rather pass than score. Now I look for my own shot. It’s comfortable that they have the confidence in me to shoot, and even if I miss, they keep encouraging shots.”

Since that dominating performance, she’s scored in double figures in six of the last 11 games, which is to no surprise to her coach.

“She doesn’t take a play off,” Fabbri said. “She has a great work ethic along with her talent sets a different tone. We know we have a star on the rise.”

McClure received high acclaim from her own conference and national writers.

McClure is the only Quinnipiac freshman to have won the MAAC Rookie of the Week award three times, including a National Freshman of the Week honor by the U.S. Basketball Writers Association for the week ending Feb. 14.

“Obviously, I am thrilled to win any award,” she said. “But, Paula [Strautmane] and Brittany [Martin] have won the MAAC award too, so this is about the team more than anything.”

Attributing her awards and success to all of her teammates, she attaches much of it to another freshman- Paula Strautmane.

“Paula is the best freshman in this league,” McClure said. “She pushes me all the time in practice and in the game. She opens up the paint because she’s such a presence in the post, I can get more open looks.”

Not only is McClure a powerful presence on the offensive end, but she also prides herself on defense, leading the Bobcats in rebounds and blocks.

“I always liked playing defense more than offense,” she said. “I take pride in stopping the person I’m guarding.”

With such feats already accomplished in her freshman season, McClure still sees endless room for improvement for the remainder of this year and her career.

“I don’t think I’m close to where I want to be right now,” she said. “I can, and hope to become a better basketball player.”

But more importantly, McClure sees bright things for the team’s future and has already made a bold prediction for 2016.

“I think we’re going to the MAAC championship and second round NCAA tournament. By my senior year, I think we’ll be in the Sweet 16 in March.”