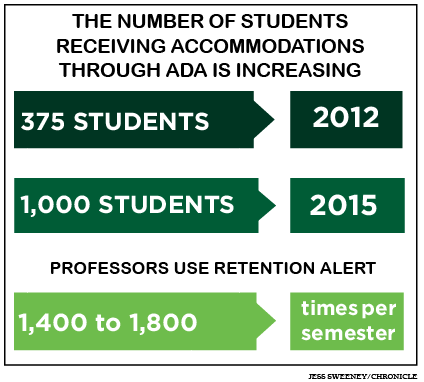 The university has experienced a noticeable increase in students requesting accommodations for their disabilities over the last few years, according to Associate Vice President of Retention and Academic Success Andrew Delohery.

Quinnipiac complies with the Americans with Disabilities Act (ADA), which has been in place since Jan. 1, 1990. The purpose of the ADA is to provide equal opportunities for people with disabilities and to lessen discrimination based on those disabilities, according to the ADA website.

There were approximately 375 students who reached out for accommodations in 2012, according to Delohery. But by this semester that number has risen to almost 1,000 students.

Delohery believes the amendment of the ADA in 2008 to support a wider range of students with disabilities has led to this drastic increase.

“While we can’t say exactly why that [increase] has occurred, what we believe is…in 2008, when the Americans with Disabilities Act was amended, it allowed for more people to take advantage of it,” Delohery said.

With the changes to this amendment, colleges across the nation are also noticing an increase in requests for accommodations, he said.

The way the university handles these cases is on an individualistic basis. Delohery said each student can feel differently about their specific situation and what might be necessary for one student might not be necessary for another.

“Every student is treated as an individual,” Delohery said. “That’s something every institution must do. The outcome of the situation may vary from student to student.”

Since each student experiences academia differently, Delohery said students should look at their experiences to decide whether they feel like they might need accommodations from the university.

“We would try to say to any student: do you feel you’re getting the support, the opportunity you’d like to have for advancement, for development, for improvement?” Delohery said.

One way the university tells students about resources is through a brief session during orientation. However, Delohery said for some students that session might be “white noise” because there is so much going on. He also said some students might be cautious about reaching out to the university out of fear they will be perceived in a negative light in a new place.

But faculty and staff can also help bring attention to students who might need accommodations or just to be told their options and available resources. For example, through the Retention Alert program the university reaches out to students who miss a certain amount of classes or whose grades are struggling, Delohery said.

“If we see any student in academic crisis, we reach out,” he said.

Delohery said professors can use WebAdvisor to identify the student, the issue and include some text about why they’re submitting the referral. Following the submission, an email is sent to the student and the student’s advisor.

“[The Quinnipiac Retention Alert] program helps direct individual students to appropriate academic support during the semester and facilitates dialogue among those working to support the student,” the student handbook states. “Academic specialists also work with faculty to bring learning skills into the classroom.”

With increasing class sizes, it can be difficult to keep up with emailing students for follow-ups after referrals and to acknowledge available resources, Delohery said. But he said that does not stop his office from helping students who need it.

“We just brought in our largest freshman class,” Delohery said. “Do we have enough resources to be able to support them adequately? I think we do—speaking from me.”

And those resources are showing results, he said.

Delohery said approximately 60 percent of students who are referred and contacted end up in the office to talk to someone about their options. Though sometimes it may take some encouraging, he said all decisions are ultimately made by the students. No student is forced to seek out accommodations or get help in other ways.

Associate Professor of Psychology and social psychologist, Dr. William Jellison, thinks that these numbers have grown due to the increased acceptance of disorders such as Attention Deficit Hyperactive Disorder.

“There is more social acceptance around it and more understanding around it,” Jellison said. “A student would be more likely to seek the resources because they are less likely to be stigmatized…There may have been just as many cases 50 years ago, but because we didn’t have the understanding nor the social awareness so people might not necessarily be seeking out these resources.”