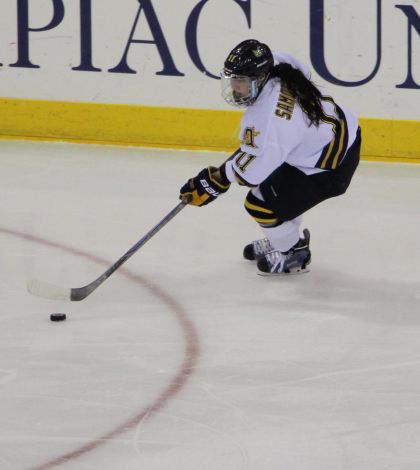 “Today, for our team, was really about honoring this group of seniors,” Quinnipiac head coach Cassandra Turner said. 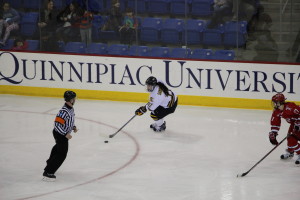 According to Turner, the seniors were crucial to the Bobcats’ victory.

“They really were the backbone of this team today,” Turner said.

The Quinnipiac seniors filled the scoresheet registering a combined total of three goals and six assists between them.

Emma Greco started the scoring for the Bobcats when she scored her first career goal on a slapshot from the point which beat RPI’s Lovisa Selander to the top corner on her glove hand side. The goal was assisted by Nicole Kosta and Nicole Connery just four minutes into the first period.

Following the goal, the Bobcats ran into penalty trouble after Shannon Cherpak took a holding penalty 6:56 into the first and Taylar Cianfarano was called for tripping 8:05 into the first. This forced the Bobcats to kill a 5-on-3 power play for 51 seconds.

The Bobcat penalty kill managed to kill off both penalties, allowing only two shots.

The Bobcats’ offense surged in the second period, scoring three goals. All of which came from seniors.

The first goal of the period came from a forehand to backhand move across the crease from Brown who slid the puck past the sprawling Selander 3:20 into the second. The goal was assisted by Connery and Kosta.

Less than a minute later, Tamberg scored on the power play 4:18 into the second. Brown and Taryn Baumgardt recorded assists on the play.

The final goal for the Bobcats came with 3:52 remaining in the period as Connery scored on a one-timer while sliding on one knee. The pass came from Kosta and Alicia Barry was credited with the secondary assist on the play.

The line of Kosta, Connery, and Brown, also referred to as the Nicole line, registered a combined total of 8 points on the night.

“Seniors just have a different sense of urgency,” Turner said when speaking about the Nicole line. “And to have three seniors that are as talented as they are on the same line… that’s what you want and that’s what you can trust down the stretch when you head into the playoffs.”

“It’s a Nicole thing,” Nicole Brown said of the chemistry between her and her linemates who all share the same first name.

The line was recently reunited after being split up earlier in the season.

“Now that we’re back together and everything is clicking, it’s a lot of fun,” Brown said.

Quinnipiac goaltender Sydney Rossman stopped all 14 shots for the Bobcats, posting her 17th career shutout, and her 15th of the season.

Rossman also posted her 26th win of the season, setting a program record for most single-season wins.

Rossman is about to see her first ECAC playoff action as the Bobcats prepare to open the playoffs at home against RPI.

“She’s yet to face playoff action here,” Turner said. “But everywhere that she’s been, she’s been a championship goalie.”

“I think we’re gonna see the same thing that we’ve seen,” Turner continued. “Just solid goaltending from Syd (Rossman) and a confidence that not a lot goaltenders have so we’re excited that she’s going to be in the net for us.”

According to senior Lindsey West, the Bobcats knew about the possibility of drawing RPI in the first round of the ECAC playoffs so Saturday’s game was, “A lot about sending a message.”

“We didn’t want to step off the gas… we knew we could really go at them and show them everything that we had, and that even still isn’t everything we’ve got and it’s gonna be a tough weekend for them,” West said, in anticipation of playing RPI again in the ECAC playoffs.

The best-of-three series kicks off on Friday, Feb. 26 at 2 p.m. and will continue on Saturday at 2 p.m. If needed, the Bobcats will play a third game against RPI on Sunday at 2 p.m. The entire series will be played at the High Point Solutions Arena in Hamden.