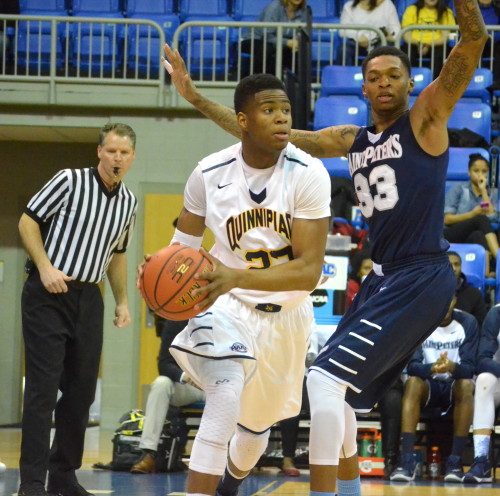 With 0.4 seconds left, Saint Peter’s junior center Quadir Welton, who had 15 points and 10 rebounds on the night, made a layup at the buzzer. 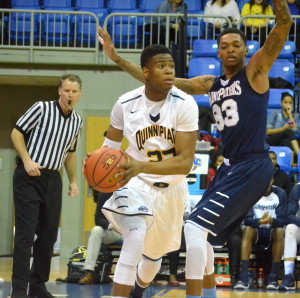 The refs went go look at it and Quinnipiac senior guard James Ford Jr., who finished with nine points and six assists, thought “the call better go our way.”

And it did giving the Bobcats the win.

Quinnipiac head coach Tom Moore thought that it was impossible for a shot to go in that quickly.

“I didn’t feel like they would give it to him,” Moore said. “0.4 (seconds) you almost have to redirect it or tip it and I did feel like that he had got it, and landed, and sort of moved, then shot.”

The win was not easy for the Bobcats. They were once down 33-17 with three minutes left in the first half. But then the Bobcats went on a 21-2 run that lasted until the 10:36 mark of the second half.

During that stretch the Bobcats held the Peacocks to 1-19 shooting on the floor. Saint Peter’s leading scorer and freshman guard Antwon Portley, who scored 25 points in the last meeting between the two teams, was held to six points and shot 2-9 from the field.

“In the second half we started doubling well,” Moore said on the team’s defensive effort. “I thought that it would make them second guess their offensive philosophy a little bit. And then James Ford just did a phenomenal job on Portley.”

“I was determined as well as my team to shut him down, keep him quiet and let everyone else on their team dictate how they play,” Ford Jr. said.

Bobcats freshman forward Abdulai Bundu, who got five points and seven rebounds, got fouled and made one of two free throws with eight seconds left.

Daniels said that his team had “toughness” on Thursday night.

“We could have easily packed up and just gave in and said maybe next year,” Daniels said. “But we keep fighting, we have a dream, and we have to keep fighting to get it. We’ve got to finish out this season strong and that’s what we plan to do. We were down by 16 at one point tonight and it was either pack it up or keep fight and we kept fighting and got the win.”

Quinnipiac is still ninth in the Metro Atlantic Athletic Conference and will host the Manhattan Jaspers on Sunday afternoon for senior day.