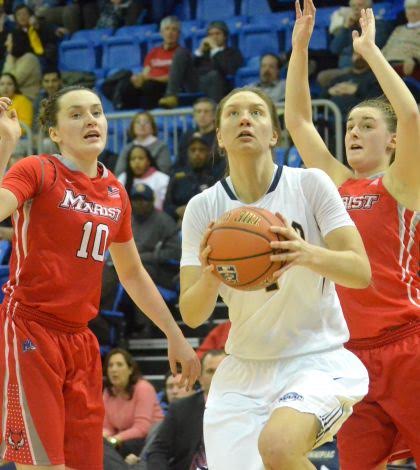 In a back and forth Metro Atlantic Athletic Conference battle, Quinnipiac women’s basketball defeated Marist by a final score of 76-71 on Thursday night. The combination of composure when it was needed most as well as efficient shooting from beyond the arc created a mixture that pushed the Bobcats just far enough to get their 13th straight victory.

Freshman forward Paula Strautmane was the leading scorer for Quinnipiac with 17 points and four rebounds.

“That’s what coach [Fabbri] always tells us when you’re open and have a shot,” Strautmane said. “Put your feet on the ground and be confident.” 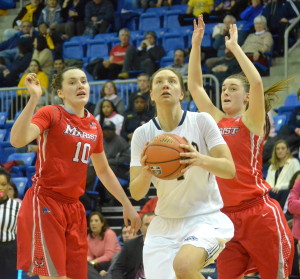 From the beginning of the first quarter, this contest quickly became a three-point shootout. The two teams combined for seven baskets from beyond the arc in that stanza alone.

Quinnipiac began the game in the driver’s seat, leading by a quarter-high six points about four minutes in. That would quickly be reversed by the Red Foxes’ ability to cause turnovers as well as the ability of their stars to shoot.

Ball security and traveling calls were in high demand from the start of this contest. In the first quarter alone, both of the teams were riddled by a combined total of 13 turnovers.

The first quarter ended with a score of 17-16 in favor of Marist, and the next quarter proved to be just as close.

The attempts from beyond the three-point line did not stop in the second quarter, although the success of those shots did take a steep decline. The two teams shot a combined 3-11 from beyond the arc in the quarter.

For the duration of the second quarter, the teams traded baskets and Marist shot 52 percent from the floor at the end of the first half, taking a 35-32 lead into the locker room.

Quinnipiac came into the third quarter focused on getting back into the game and they did just that. At one point a Quinnipiac went on a 24-7 run. The Bobcats got production from their core players and only gave up a single turnover in the third quarter to Marist’s six giveaways.

Reigning national rookie of the month Aryn McClure emerged in a huge way in the third after not scoring for the entire first half. McClure recorded four points as well two rebounds and a crucial block in the third quarter alone to bring the Bobcats to within one point of Marist, ending the quarter 52-51.

“Give my team a lot of credit,” Fabbri said. “The composure that we have is just second to none and you would never know it going into that timeout down ten.”

Quinnipiac did not look back after that third quarter surge and again looked to their core of Strautmane, McClure and Maria Napolitano who combined for 17 of Quinnipiac’s 25 points in the final quarter.

Solid free throw shooting in the final minutes of the game secured a 76-71 Quinnipiac victory.

Although this 13-game win streak is a great accomplishment, the Bobcats remain far from satisfied.

“This isn’t our goal,” Napolitano s aid.“We could have a win streak and then go up to Albany and lose the first game and that isn’t what we want to accomplish.”

The Bobcats are back in action on Sunday, traveling to Rider.