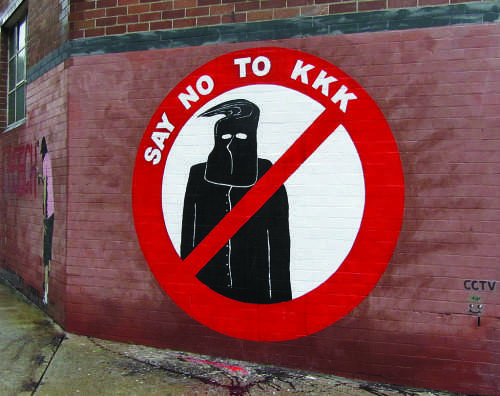 The white supremacist organization, the Ku Klux Klan was created during the Reconstruction era, but chapters still exist today.

A recent Internet meme featuring the Ku Klux Klan has misconstrued both history and current events in a way that promotes ignorance. The picture shows the women who danced during Beyonce’s Super Bowl halftime show performance with text that reads: “Beyonce’s dancers during Super Bowl. Supporting Black Panthers. Apparently it’s totally okay to be racist if you’re a black celebrity.” Underneath is another picture of several Ku Klux Klan members waving their arms with text that reads “Next Super Bowl halftime show.”

The meme appears to try to say Beyonce was somehow being racist in her Super Bowl performance, so next year we should amp up the racism and bring in the KKK. Yet, to suggest the KKK, a white supremacist organization responsible for the murders of thousands of black people and the 1963 16th Street Baptist Church bombing, should perform at the Super Bowl is a disgrace to everything this country should stand for.

In “Race and Racisms: A Critical Approach ” author Tanya Maria Golash-Boza defines racism as “(1) the belief that races are populations of people whose physical differences are linked to significant cultural and social differences and that these innate hierarchical differences can be measured and judged, and (2) the practice of subordinating races believed to be inferior.”

Maybe I watched a different Super Bowl performance than the meme creator, but nowhere did Beyonce perpetuate the idea certain races are inferior to others.

But what is even more disturbing than the desecration of Queen Bey is the way the meme equates the Black Panthers with the KKK.

The Black Panthers formed in 1966 during the Civil Rights Movement. The party set up programs, such as ones that gave free breakfast to school children, protected people against police brutality and promoted community pride, according to PBS.

However, the party is also associated with violence. When one types in “Black Panther Party” into Google images, several pictures of men with guns comes up. The group was involved in a shootout with the Oakland police in 1968 and went armed to the California Legislature in 1967 to protest a gun control law, according to USA Today. One of its cofounders, Bobby Seale, was accused, but not convicted of murder, according to PBS.

One should always hope communities and groups can push for and create social change without guns. But the truth is, violence attracts attention to causes, which makes change faster.

Besides, systematic racism and horrific acts by groups like the KKK foster justifiable anger in members of the black community. So then organizations like the Black Panthers form because marginalized people need a group that makes them feel connected to others and celebrates their identity. The KKK, on the other hand, lynched black people and burned their houses because they
thought white people were superior.

Nor is the KKK is a thing of history. For example, a Missouri chapter of the KKK passed out fliers in St. Louis and on social media in November 2014 saying they would use “lethal force” against Ferguson protests, according to Vice News.

Klan members, as well as institutionalized racism, are still hurting people’s lives and the country as a whole. This is why there’s a line, and KKK jokes cross it.