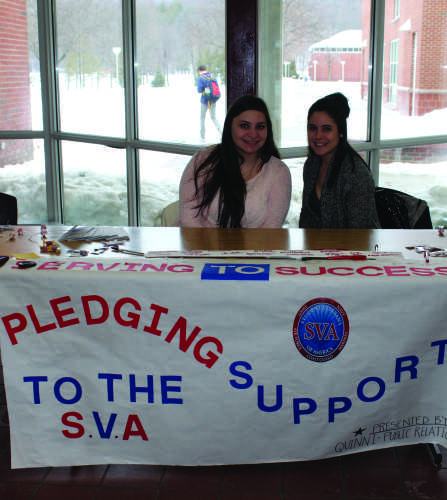 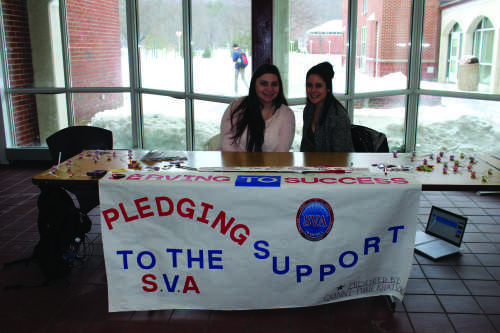 The Bateman Case Study Campaign is PRSSA’s premier national case study competition that gives public relations students an opportunity to apply their “classroom education and internship experience to create and implement a full public relations campaign,” according to PRSSA.org. The goal of the competition this year in partnership with SVA (Student Veterans of America) is to increase awareness about student veterans around the world and increase networks and support for them, the website said.

In this year’s competition Quinnipiac will have two teams, each tasked with creating their own campaign to raise awareness for the student veterans on campus through different events and promotional activities from Feb. 15 to March 15.

Hilary Fussell-Sisco, associate professor of strategic communication at Quinnipiac and professor of the STC 402 class that participates in the competition, hopes the month-long event will make the community more knowledgeable about what student veterans face.

“Hopefully this is the big blossoming of awareness, but then people will also know that there is a resource to go to if you’re a returning veteran,” Sisco said. “So they know there’s a place they can go for issues and coming back and transitioning.”

One of the students in this year’s competition, senior Carly McKenna, said she wants the competition to unite students and student veterans.

“We want to break the stigma between us and student veterans and show how we’re all students here at Quinnipiac,” McKenna said.

Another competitor, senior Katherine Lizotte, states a similar objective, “We want to get people to know that there are student veterans on campus who are just normal people going to school and they’re doing awesome things,” Lizotte said.

According to the president of Quinnipiac’s Student Veteran Organization, senior Zachary Peters, there are over 150 student veterans or family members of veterans who currently attend Quinnipiac which he calls “quite a large number.”

Despite this high count, Peters has still faced instances where people were unaware there were veterans on campus.

“When I tell people I’m a part of the Student Veteran Organization or that I’m a veteran most of the time the reply I get is ‘I didn’t even know there were veterans here,’” Peters said. “I also think the campaign is a good way to let students and faculty know about the struggles student veterans face while integrating back into civilian life.”

In addition to making people more knowledgeable about the challenges veterans face, student veteran and business major, junior Christopher Bolduc, thinks the campaign will help the veterans on campus in a bevy of other ways.

“Raising awareness will help veterans, in general, get the funds they need,” Bolduc said. “I think this campaign is going to help show veterans that the transition is easier than they think and that coming to college is just a great benefit for them instead of pushing it away.”

Bolduc feels raising this awareness will influence more veterans to come to school because they’ll feel welcomed and at home as opposed to being an outsider.

“Me, specifically, being a combat veteran going into a freshman class when I was 23-years-old was really different because none of those women or men have seen what I’ve seen or have done what I’ve done,” Bolduc said.

Sharing these types of stories of what student veterans have gone through prior to and while attending school is something McKenna’s team will be addressing through one of their events.

The team consisting of Carly McKenna, Ali Sayles, Phil Lentini, Emily Hennessy and Melissa Barosy, who named their campaign “Bridging the Gap,” will be hosting a panel on March 2 at 9:15 p.m. in Mancheski where five student veterans will answer questions and discuss the experiences they’ve had and the struggles they still face.

“We want to portray the message that they want,” McKenna said. “To show students that we are all sort of the same we just come from different backgrounds.”

The other team, consisting of Katherine Lizotte, Morgan Moschetta, Rachel Trifon, Catherine Wehrle and Victoria Renner, named their campaign “Serving to Success.” The team has been tabling in the Carl Hansen Student Center Monday, Feb.15 and will continue through Friday, Feb.19. They will be displaying a large, wooden, 3-D American flag that individuals can sign as a way of showing their support.

Further, the flag will be brought to another tabling at the Feb. 26 women’s basketball game to get signatures and educate not only Quinnipiac students, but members of the Hamden community as well.

“It will be information to teach people about all of these different things that are happening,” Moschetta said. “Then they can sign their names to show that they are now more aware and educated.”

Both teams will also campaign through various social media pages and initiatives that will take place on platforms including both Facebook and Twitter.

For the competition, each team will submit their final entry to PRSSA headquarters in April where they will be judged. Three finalists will be chosen to present their campaign to SVA sponsor representatives.

McKenna and her team said the experience has been a positive one and they thank Dr. Fussell-Sisco and their advisor from Pratt and Whitney, Raymond Hernandez, for being great role models and mentors.

Lizotte and her team echoed similar sentiments to Fussell-Sisco adding that the whole team is honored and grateful that they were chosen to be the first representatives from Quinnipiac in the competition.

Each team will know if they were chosen as a finalist by PRSSA on Monday, April 18.