A fun weekend outing can quickly turn dangerous if someone is misinformed about the dangers of date rape drugs.

Otherwise known as Club Drugs, Roofies, Liquid Ecstasy or Special K, date rape drugs are known for being used to drug people, making them vulnerable to their surroundings and succumb to their attackers.

Every 21 hours, a woman is raped on a college campus, according to the Health Research Funding website. But men can be victims of rape and date rape drugs, as well. One in 16 men and one in five women will be sexually assaulted while in college, according to a 2015 report by the National Sexual Violence Resource Center. Still, a majority of these crimes are never reported.

Both alcohol and drugs can be factors in sexual assaults. Nearly 90 percent of sexual assault victims had drank alcohol before being attacked, according to a Canadian Medical Association Journal study of 882 victims. The same study found 20 percent of victims were drugged.

Freshman Sophie Toure knows the impact these attacks can bring to people. Her cousin was drugged and sexually assaulted last year.

“[My cousin] was raped last year and she had a baby because of that,” Toure said. “She was originally living in West Africa, but then once her mom and everyone else found out she was pregnant, she moved to France to live with her father.”

Because of her relative’s traumatic experience, Toure finds herself cautious when she goes out.

“I don’t go out often but when I do I’m very careful, especially since that happened to my cousin,” she said.

But these drugs are not easily detectable.

GHB can be in an odorless, colorless liquid form, a powder or a pill, according to the document. Ketamine is a white powder and rohypnol is a pill that can dissolve in liquid.

These drugs are usually hidden inside the victim’s drink, so it is advised that during any social event, one must never leave his or her drink unattended.

Drinking alcohol can also create issues when trying to figure out whether someone has been drugged or if they have just consumed too much alcohol, according to Chase.

“It can be difficult to tell the difference of someone who has been drugged vs. someone who may have drank too much,” Chase said. “Many of the symptoms overlap.”

Some students say the university could do more to teach them about date rape drugs and how to help their friends if they were drugged.

Senior health science major Gabriella Vacante said she has not learned about date rape drugs much in high school or at Quinnipiac. 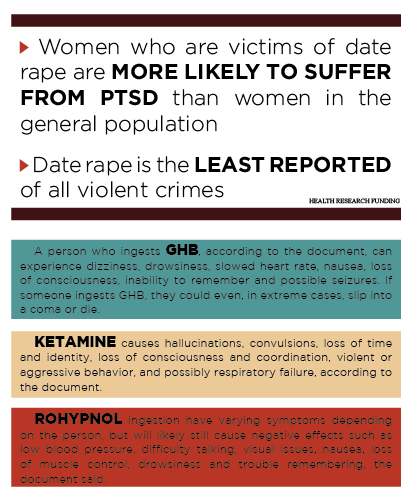 “It never really comes up,” she said. “I think [the university] should definitely have different events held [to teach students about it] because that would probably be a good thing. … The Student Center [should] promote [date rape drug awareness] more. I’m sure there are pamphlets and stuff, but you don’t really notice.”

Lubna Farooqui, a freshman biomedical science major, learned about date rape drugs in her high school sophomore health class. But a few years later, she does not remember everything she learned then.

“I personally don’t know the differences [between being drugged or drunk], unless they’re very severe,” Farooqui said. “I don’t remember completely what I learned back from my sophomore year and I’m not sure how much other students might know about it, so I think it’s definitely something you should be aware of and you should know about.”

Most students probably would not know what to do if they were drugged or if a friend were drugged, Farooqui said. This is why the university should consider incorporating these lessons into classes, such as the first-year seminar course, she said.

“I feel like that would probably be something nice to cover in FYS or something,” Farooqui said. “Because all freshmen have to take it and it’s a pretty important thing to know about, especially if you go out partying and drinking. That’s something you really need to be aware of and it’s pretty scary to have to deal with something like that. You’re requiring students to take FYS, you might as well throw that into the curriculum and actually have them learn something worthwhile.” 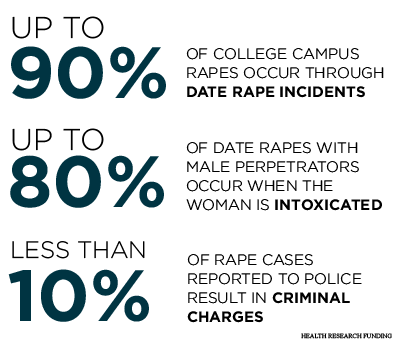 Many people around the country are working to prevent further drug-facilitated sexual assault. For example, a group of North Carolina State University researchers are currently manufacturing nail polish that changes color when it detects date rape drugs of any substance.

“With our nail polish, any woman will be empowered to discreetly ensure her safety by simply stirring her drink with her finger,” the company Undercover Colors’ Facebook page reads. “If her nail polish changes color, she’ll know that something is wrong.”