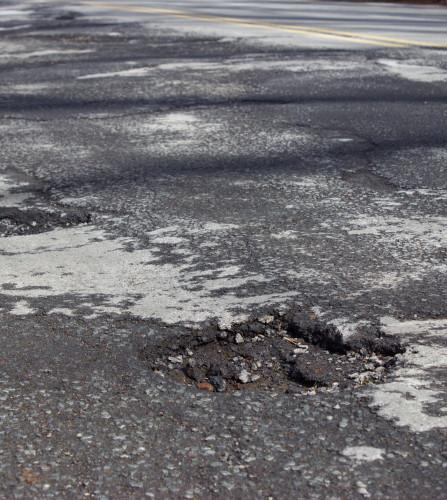 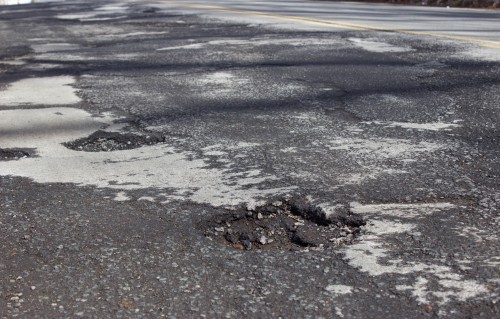 Some residents of New Road think the Public Works Department is overlooking the pothole problem on the road.

The responsibilities of the Public Works Department include fixing potholes, removing trees that may be hazardous to driving conditions and road and curb repair, as stated on its website.

Senior Kori MacDonald lives on New Road and uses the road on a daily basis to attend classes during the week.

“The condition of New Road is not good,” MacDonald said. “A lot of cars are always swerving into the other lane to avoid potholes.”

According to MacDonald, swerving into the adjacent lane can allow you to avoid a pothole but is equally as dangerous.

“When you see the car in front of you swerving [to avoid a pothole] you decide if you want to swerve or hit it. You have to look at the oncoming traffic to make sure swerving is better than going through the pothole, but there’s always that potential danger,” she said.

MacDonald said because she drives on New Road every day, her car is slowly being damaged  and there will likely be long-term negative effects on the car, rather than if she were to drive on the road every so often.

Sophomore Katie Cavallaro commutes to Quinnipiac and is not happy with the condition of the road or the effects that it has had on her vehicle.

“I actually haven’t been on that road in a while,” Cavallaro said. “But before the snow it was still pretty bad and there were bumps and ditches in the road; it’s not a smooth drive. When you hit a ditch it scratches or even dents the front of your car.”

Sophomore Bonnie Skinner has hit the potholes that are scattered on New Road and is not satisfied with the effect they had on her vehicle.

“The potholes are everywhere and I personally have hit a few of them so my tires are probably a little bit damaged, which stinks but everyone’s cars are probably ruined,” Skinner said.

According to Skinner avoiding the potholes is almost impossible and damage is bound to happen to all vehicle that pass the road like Skinner the first time she hit a pothole.

“The one that I first hit was the one right next to the intersection where the cops sit, there’s a huge pothole there, and I hit that one and I thought that my tire was blown out,” Skinner said. “It’s fine but it just stinks because everyone I carpool with too hits the potholes.”

Since New Road is a long road that is frequently used, Skinner believes that it would be difficult to close down the road to repairs the potholes.

“Over the summer they should definitely try to fill up all of those potholes because a lot of people have probably been in dangerous situations because it,” Skinner commented.

Senior Catherine Wehrle has also experienced the effects of the potholes on New Road.

“I currently live on New Road and commute to class multiples times a day during the week and on weekends,” Wehrle said in an email. “The condition of the road is awful and makes commuting to class feel sometimes unsafe and nerve-racking.”

According to Wehrle, in addition to the unsafe condition of the road for driving, the potholes also present various hazards to the vehicles that use it for passage on a daily basis.

“I have had to refill my tires with air multiple times due to potholes and road conditions as well as ask the mechanic to check my car’s axle during service appointments to make sure it is still intact,” Wehrle said.

There are many things that could be done to improve the condition of the road, according to Wehrle.

“Students who primarily use New Road are not here for four months over the summer break and, while it would inconvenience the residents of Hamden and few students on campus, it is worth the time and cost [to pave the road],” Wehrle said.

Wehrle never considered calling in a complaint about the road to the Department of Public Works because of the minimal effect it would have on her commute to Quinnipiac.

“I have never thought about calling the public works department because it has really only affected me this year and I graduate in four months. If I did it wouldn’t be changed in time for my benefit,” Wehrle said.

The Department of Public Works is open Monday through Friday from 8 a.m. to 3 p.m. as stated on their website. According to the secretary, the Director of Public Works Craig Cesare has not been available for comment within the past week because of the recent accumulation of snow.