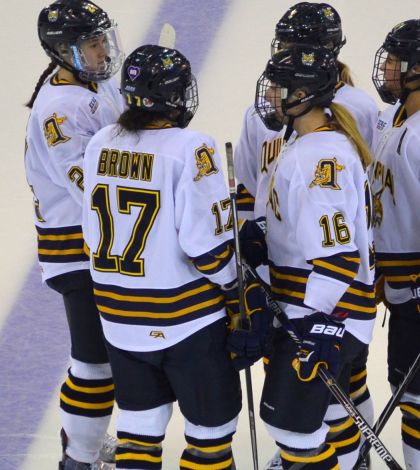 As the women’s hockey season is coming to a close, so are the college hockey careers of many Bobcat seniors. Among them are Lindsey West and Nicole Brown.

West and Brown are about to close another chapter of their long history playing together. In fact, the two have been teammates since before they were Bobcats, both playing for the Whitby Jr. Wolves and the Team Ontario select team.

Both West and Brown credit the Whitby Jr. Wolves and their coaching staff for helping them develop as players.

“It definitely got me to where I am today,” Brown said. “I don’t think I would be at Quinnipiac if I didn’t go to Whitby first so it was a really awesome experience.”

“[The coaching staff] works with each player to help them accomplish what they want to do,” West added. 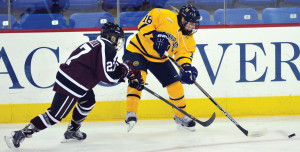 Both West and Brown felt that going through the recruiting process together, along with their teammates on Whitby and Team Ontario, made it much easier to decide on their future.

However, when Brown was first contacted by Quinnipiac, she knew nothing about the school.

“I had to Google it,” Brown said. “Just talking about it with my teammates at Whitby, I found out that Lindsey [West] was also interested in Quinnipiac. So we kind of rode on that process together, talked about phone calls and things like that, so it was cool to go through it with someone who is actually on my team now.”

“I remember having phone calls with Cass (Turner), who at the time was the assistant coach and she really was the one that made the program seem like a place where I wanted to be for the next four years – a place that I could call home,” West said.

“I remember talking to Nicole and the day that she committed we knew that for the next four years we were still going to get to play together and have the chemistry that we built in Whitby to continue.”

West and Brown had a history with several Quinnipiac players as they were teammates with Kristen Tamberg, Cydney Roesler, and Nicole Connery on Team Ontario.

“We had that experience to play with each other and know each other from the past,” West said. “Coming to school with a group of friends was a lot of fun.”

According to Brown, it is rare to see a team with as much past history together as the Bobcats.

“It’s definitely something that a lot of other schools can’t say they have in a senior class is five players who have all played together before they came to the school,” Brown said. 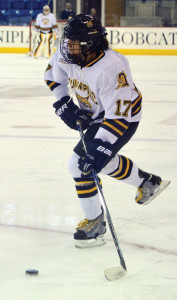 Turner explained the reason her team is filled with so many players with prior experience as teammates.

“The neat thing in women’s hockey is that when you look at some of the top teams, they have a number of good players on them.” Turner said. “Once you’re involved in one program, usually there’s more than one player that’s strong there so it’s always nice when there’s people who know each other well and both get excited about going to the same place.”

According to Turner, West and Brown have had a big impact on the team.

“It’s remarkable just how well they’re playing, and how much they’ve developed and how confident they are in playing the role that we need them to play and saying, ‘this team comes first and I’m going to do whatever I can to help this team,’” Turner added.

Turner also added that due to West’s competitive nature and Brown’s humor, the two are very important to the team’s chemistry.

“They’re a lot of fun and without them we wouldn’t have the team dynamic that we have right now. They’re both really important [to this team].”

Over the years, the two Ontario natives have become close friends.

“I’ve seen Nicole grow and what she’s done even in hockey and in school and just life,” West said. “You see each other, you live with each other, and you learn the patterns.”

“I know how to push her buttons and things like that,” Brown added. “She eats pasta every single day, Kraft dinner is probably her favorite… We’re like sisters now I think. I know a lot about her and she knows a lot about me.”

According to Turner, West and Brown have improved a lot since coming to Quinnipiac.

West, a defenseman, has 8 points this season after scoring 10 points last season, 6 as a sophomore, and none as a freshman.

Both players have suited up for all 31 games so far this season.

“They’re both so much stronger,” Turner said. “We have an outstanding strength and conditioning program… and both of them have picked up speed, they’ve picked up strength, their shots have improved, their quickness, their agility on the ice [have all improved].”

As their college careers come to a close, both players have taken time to reflect on the time they spent at Quinnipiac University.

“It’s cliche, but it’s gone by so fast,” West said. “Getting to play a sport is definitely something that’s made it fun, but I can’t believe it’s kind of–it’s hard to say–coming to an end.”

“I’m jealous of all of the people who are going to come in and take our place over the next four years. If I could do this all over again I’d definitely do it,” Brown said.

West was sure to add that the team felt like a family.

“I’ve grown to have 23 other sisters… I [could] never picture doing this with anyone else,” she said.

Both players hope to aid the Bobcats in reaching the Frozen Four this year, but as for their own futures, Brown and West are considering their options.

“We’re both kind of on different paths with what we’re doing for school,” West said. After all, she majors in public relations while Brown is a health science major.

However, both players are considering the possibility of playing together in Europe.

“It’s a possibility,” West said. “It’s still something kind of in the works, we’re not really sure… what’s going to happen in the next couple of months.”

“And we only live like 10 minutes away when we go back home to Canada so I’m sure we’ll run into each other every now and then,” Brown said, jokingly. “I can’t quite get rid of her.”