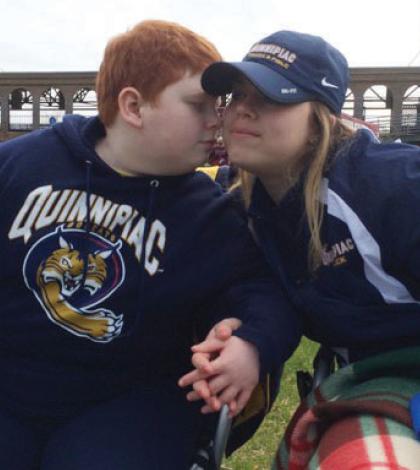 For most individuals, there is a time where perseverance is an obligatory characteristic in order to achieve.

When Mackenzie Merkel was 8 years old, her brother, Aidan, was diagnosed with a genetic disorder that complicates everything he attempts to do. Two years later, Aidan was also diagnosed with Autism. For Aidan, giving up is not an option, and for his sister, Mackenzie, it is no longer an option either.

Sophomore Mackenzie Merkel of the women’s indoor track team uses both her love for her brother as well as his display of perseverance to create a fuel that pushes her to be better.

His entire life, Aidan has had trouble accomplishing the tasks that we think of as everyday activities, including his current inability to talk. It is Aidan’s constant effort and persistence toward things such as attempting talking to his sister that push Mackenzie every single day at practice and events.

“I don’t like when people say that you can’t do something,” Merkel said. “Because you don’t know if they can or can’t, you’ve never seen them try.”

Merkel said she would do anything to have a conversation with Aidan, even if he was speaking Spanish.

Regardless Merkel said the two are close.

“As weird as it sounds, because he can’t talk, so how could he be your best friend? But he really is my best friend,” she said.

As a senior at the Academy of Holy Angels in Demarest, New Jersey, Merkel earned all-league as well as all-division honors in the shot put, the event that she would carry on with following that season.

Upon arrival at Quinnipiac, the shot put event for the respective women’s indoor track team was non-existent. Merkel plans on wasting no time making her mark on the newly orientated program.

“What a great thing to start, I could be the first person to throw shot put at Quinnipiac,” Merkel said. “To leave a mark that hasn’t been left yet.”

Merkel had a solid campaign in the inaugural season of shot put at Quinnipiac, setting a personal best of 39.46 feet as well as placing 10th overall in the MAAC Championships. While this start was pretty extraordinary, Merkel remains far from satisfied.

“I need to get my numbers up this year,” Merkel said. “Because they expect me to come in and break boundaries, so now that’s what I have to do.”

Satisfied or not, Merkel’s teammates are continuously impressed by her work ethic and the way in which she pushes herself as well as her peers forward.

“She is kind of the workhorse of the team,” sophomore sprinter Jessica Lee said. “She goes out of her way to do things on her own outside of practice to ensure that every meet she sets personal records and gets better.”

Lee is not the only one who notices just how hard Merkel works on a day-to-day basis. Assistant coach Steve Belanger does as well.

“There’s a lot of workouts where I see that fire, she wants it,” Belanger said. “She wants to get better. And you know, a lot of athletes just don’t have that.”

Where does this “workhorse” mentality and drive stem from for Merkel? That would be her little brother.

“He just works so hard,” she said. “It’s amazing because he still seems like a baby to me but he has come such a long way.”

To communicate with Merkel and the rest of his family, Aidan uses an iPad that he types into and it speaks for him. While this may seem like an easy thing to do for most people, unfortunately, for Aidan, the movements required to do such a thing takes a lot of practice and hard work.

Merkel and her family credit Aidan’s physical therapist for his development and growth both physically as well as mentally, and it is that feat that pushed her into the physical therapy/athletic training major.

“He’s had the same physical therapist since he was born, so she’s helped him so much,” Merkel said. “That’s why I want to do that, because I want to be able to help other kids like him so that they can progress.”

A combination of the agonizing schedule of a Division I athlete paired with the daunting academia of the physical therapist major would also cause most to lose focus. Mackenzie, on the other hand, is combatting it quite well according to her senior captain Kristen Ulrich.

“She is always running around but she always gets her practice in,” Ulrich said. “She is also there for anybody else on the team too.”

Ulrich not only pointed to Mackenzie’s dedication, but her talent and leadership as well.

“She’s the best shot putter we have,” Ulrich said. “There are a lot of newbies for the shot put and when she is watching them and sees a single thing they are doing, she pulls them aside and shows them exactly how they are supposed to be doing it.”

After becoming exactly what her brother Aidan needed in a sister, Merkel has also become everything her peers need in a teammate and a friend.

When it comes to what the rest of her time as a Bobcat will hopefully bring, Merkel says she looks to push past 40 feet for a new personal best, with her parents Ronald and Colleen, and of course Aidan, by her side.