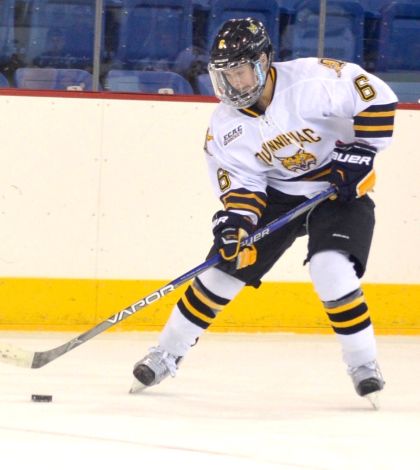 After its 3-0 win last time out against St. Lawrence, Quinnipiac women’s ice hockey looked to build a new winning streak against No. 5 Clarkson at home on Saturday, however, played to a 2-2 tie.

“What a fun hockey game to be a part of today,” Quinnipiac head coach Cassandra Turner said. “I’m really proud of the effort our team put in today.” 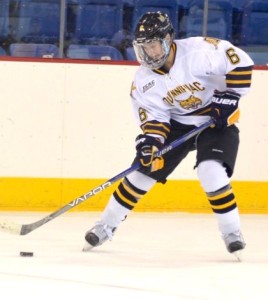 The Bobcats’ effort was visible just 1:07 into the game when junior forward Emma Woods potted her eighth goal of the season off of a beautiful T.T. Cianfarano feed. Cianfarano’s assist was her 20th of the season, further extending her season-high in both assists and points (43) once again.

Cianfarano played alongside newly formed linemates Woods and Melissa Samoskevich for the third game in a row.

“We’re happy about their chemistry,” Turner said. “We think they can consistently produce for us.”

Luckily for the Bobcats, Sydney Rossman brought her A-game once again.

“She’s a championship type goalie,” Turner said. “We’ve been saying as a staff she’s one of the best goaltenders in this conference and she showed that today.”

Rossman faced and stopped all 22 Clarkson shots until Loren Gabel managed to find twine high-glove side just under four minutes in the third period.

Clarkson continued to edge the Bobcats offensively, however, after a body checking penalty to Clarkson, Quinnipiac found themselves in the offensive zone.

Samoskevich was able to capitalize on the man advantage off of a Woods backdoor pass to take the 2-1 lead.

The Bobcats carried the lead well into the third period, until Golden Knights forward Cayley Mercer tied the game at 2-2 with just 56.6 seconds remaining to force overtime.

“It was a tough battle,” Turner said. “It’s exactly the type of hockey game we want to be in at this point of the year.”

Just 1:37 into extra play, Emma Woods took a tripping penalty to put Clarkson on the power play. However, the Bobcats played sound defensively and were able to kill off the biggest penalty of the night.

“Our penalty kill was outstanding today,” Tuner added. “On the bench they can make adjustments and immediately put that into play, and we did that on our penalty kill.”

The score still stood 2-2 when the final whistle blew and although Quinnipiac may have lost the late lead, Turner notes that this is a great learning experience heading into postseason play.

Next up the Bobcats take on Union College Feb. 19 at home in hopes of adding another win to their incredible season.

“We’re really happy with our effort today,” Turner said. “There are some things we can learn from today, but this is a really good place for our team to be.”