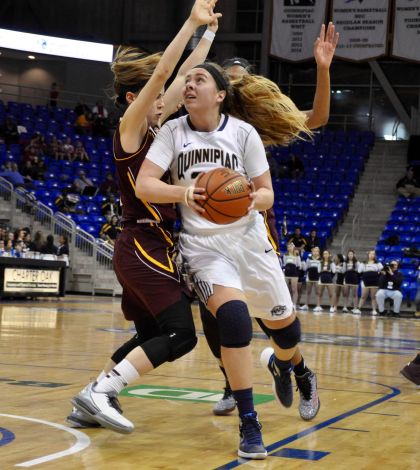 Behind Aryn McClure’s 22-point performance, Quinnipiac women’s basketball (16-7, 11-3 MAAC) overcame a seven-point deficit in the fourth quarter to prevail over Metro Atlantic Athletic Conference leading Iona (17-10, 13-3) by the final score of 62-61 at the TD Bank Sports Center on Friday night. 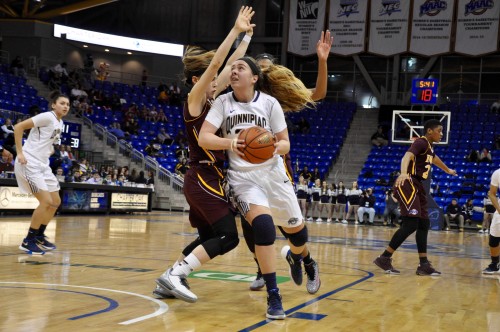 Unlike its last four home games, in which Quinnipiac won by a margin no less than 17, Iona presented a struggle.

The inside attack of Paula Strautmane and Aryn McClure contributed 20 of the 25 total points put up for Quinnipiac in the first half; the rest of the Quinnipiac offense shot 1-18 from the floor – including a goose egg on 12 attempts from 3-point range.

Despite the shaky start, Quinnipiac head coach Tricia Fabbri was optimistic with the deficit.

“We started off a little rocky against the pressure,” Fabbri said. “I do think it was nerves and adrenaline. We were playing the top team in the conference.  We weren’t even playing our type of game, so we were happy to only be down six at the half.”

The Bobcats started to get other offensive contributions in the third, but couldn’t significantly cut into the lead.

Trailing 50-43 early in the fourth quarter, Quinnipiac’s offense continued answering and the defense held up.

“Aryn and Paula just took off and that opened up everything and allowed us to kick the ball out and get some shots to go down,” Fabbri said. “Defensively we were doing enough to keep us in the game.”

After McClure sunk a layup to trim the lead to three, Iona’s Aaliyah Robinson nailed a 3-pointer, pushing the lead to six. The Iona answer was a common theme throughout the game.

But, Quinnipiac’s Carly Fabbri answered Robinson with a three of her own, and connected with a second one to tie the game at 53 with 7:14 to play.

“I knew that if Aryn or Paula aren’t going to take it in all the way, I have a chance to get the ball and thankfully they went in today,” Fabbri said.

Iona briefly led by two with 3:38 to play, but McClure stepped up again and tied the game at 59 with another inside score.

“You expect so much of her on a night-in and night-out basis,” Fabbri said. “She was just fantastic for us.”

After Strautmane sank two free throws to put the Bobcats up 61-59, Napolitano made one of two shots from the charity stripe, giving Iona one last hope.

Marina Lizarazu, who finished with 17, air-balled a game tying shot from behind the arc, securing a Quinnipiac victory. The Bobcats have recorded 50 wins since joining the MAAC, and moved one game behind Iona in the MAAC standings with the victory.

The Bobcats travel to New Jersey for a Sunday afternoon game against St. Peters.