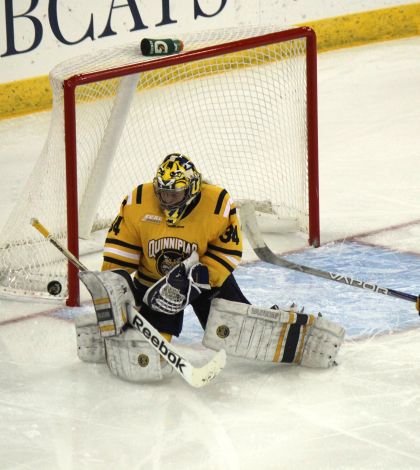 After seeing its program record 22-game unbeaten streak ended its last time out, Quinnipiac women’s ice hockey got back on track against St. Lawrence on Friday night. Behind Sydney Rossman’s 13th shutout of the year, the Bobcats defeated the Saints 3-0 at High Point Solutions Arena. 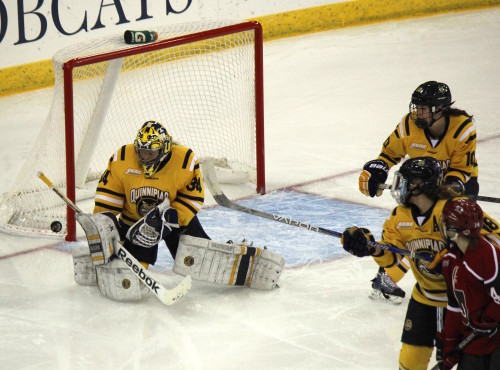 Quinnipiac head coach Cassandra Turner explained what the coaching staff did to get the team back on track prior to the win.

“We had a good conversation as a team on Monday about what the game looked like last Saturday, and not about the result,” Turner said. “I think that the whole of this team has been about process all year, so for us to discuss the process of us helped us realize what went wrong and realize that we should treat the [St. Lawrence] game as a fresh start.”

The first breakthrough of the game came when Melissa Samoskevich wristed an Emma Woods backhand past St. Lawrence goalie Grace Harrison. The goal was Samoskevich’s 15th of the season and Woods’ 20th assist.

“It is honestly a team effort,” Samoskevich said. “A lot of those goals wouldn’t happen if it wasn’t for the other players on the ice with me, so really I find myself lucky.”

Nicole Brown’s fifth goal of the year gave the Bobcats the 2-0 lead halfway through the second period.

The Bobcats found themselves in a precarious position, as they were defending 5-on-3. However, they would kill the penalties and leave the period with their lead intact.

Rossman explained how the team thrived when at a skater disadvantage.

“We obviously don’t want to take penalties but it kinda lights a fire underneath you,” Rossman said. “Five on three you just have to give it everything you got, and our penalty kill has been awesome this year.”

Woods found the scoresheet again, as she scored the third and final goal on an open net. The goal is Woods’ sixth, and the assist gave T.T Cianfarano her team leading 42nd point of the season.

Following the victory, Quinnipiac is now 24-2-4 on the season and 14-2-3 in the ECAC. The Bobcats will prepare for the quick turnaround, as they play host to the No. 5 Clarkson Golden Knights on Saturday night at High Point Solutions Arena.