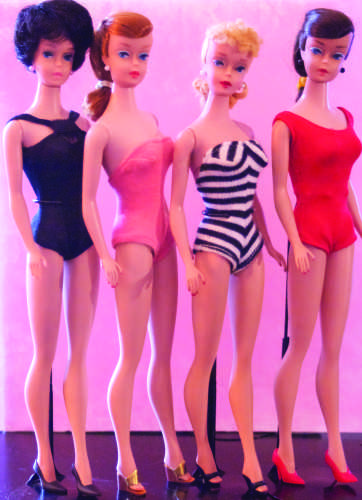 Barbie strays away from the stereotypical form, as shown above.

As a kid, I had over two dozen Barbie dolls.

Though, if you stripped them of their outfits they all seemed to look the same. White blonde hair, baby blue eyes, voluminous lashes, super skinny physique and a fair skinned complexion.

For 57 years now, Barbie dolls have not accurately portrayed women in America. We naturally come in all different shapes and sizes, skin tones, nationalities, hair colors, and eye colors. Why do all Barbies then look like clones of one another?

“Kids should be exposed to diversity at a young age. Just because kids’ brains are sponges and can get a certain image in their head as they grow up to look and be a certain way,” sophomore Tori Wakefield said. “If they see that

Barbie is like themselves–not the stereotypical Barbie–then it’s okay to be different and not look the same as everyone else.”

That’s why Mattel, the toy company that manufactures Barbies, made toy stores ecstatic last week when they introduced a new line of dolls with four different body shapes, seven skin tones, 22 eye colors and 33 hairstyles. Barbie, welcome to the changing times of 2016.

“I believe in diversity,” junior Sydney Kinsman said. “At a young age I knew and understood what stereotyping was. That is why I liked the Bratz dolls. Right from the start, they had white, African-American and Chinese inspired dolls.”

Tenneh Sillah, a junior, is very excited about this change.

“Little girls now have someone to play with who is not tall, blonde and perfect,” Sillah said. “Where was this when I was young?”

Shauna Golden, a sophomore, said she loved to play with the dolls as a child, and is pleased to see that they are making their Barbies more realistic.

“I think this is great,” Golden said. “They’re definitely trying to give them proportions that are closer to an average person.”

Now when little girls dash into the toy store they can pick out a doll that’s relatable and reflects who they are.

“I think it’s really nice to show kids at a young age that everybody is different and size doesn’t matter as long as you’re healthy and happy with the way you feel,” freshman Holly Zabkar said.

Wambach in particular is trying to impact and inspire little girls in a number of ways. She has been open about her sexuality and tries to show woman to be brave.

She now has her own Barbie doll. Athletes usually get their own action figures rather than dolls. Is this the first Barbie with a pixie cut?

“It’s going to encourage younger girls to accept changes that are occurring in society today and reflect on a more positive society for the future so our children don’t have to go through as many bullies for their uniqueness,”Wakefield said.

Some students said it’s great that Barbie is now trying to reach out to the masses, but this should have been done a while ago.

“They are showing young girls that you are beautiful no matter your race, age, height or weight,” Golden said. “My only complaint is I wish they had done it sooner.”

So did Mattel miss their mark? According to CNN Money, Barbie sales plummeted 16 percent in 2014 and Fortune said, Barbie’s demographic has narrowed.

“Barbies aren’t as big now in comparison to when I was a child,” Kinsman said. “I don’t know what kids like now, but if they are still into Barbies now is the chance to make an impact. But if they don’t play with Barbies it won’t affect or change anything.”

Even though Barbie may have missed out in delivering racially diverse dolls during its prime years, this iconic, classic company is taking big strides in doing the right thing for young girls today.