Bobcats on the big stage 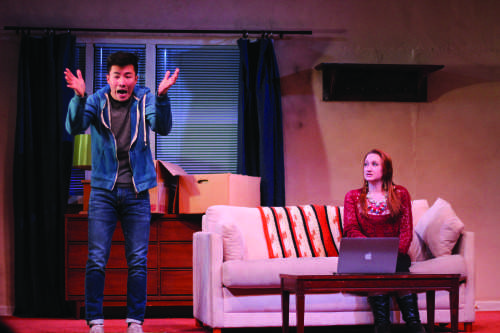 Over the weekend, a group of 35 Quinnipiac students, in association with the QU Theater for Community, ventured out into the Big Apple for the New Play Festival. This festival, held in the Abingdon Theatre, is a place for students who enjoy theatre to visit New York City and to experience what it’s like to put on a play, from start to finish, on the big stage.

This program started three years ago with the efforts of Assistant Teaching Professor of Theater Kevin Daly.
“For about seven years, our theater department had a relationship with Abingdon Theatre Company in NYC. Each year they would plan four professional workshops for our students” Daly said in an email. “These workshops were very productive and had a lot of benefits for the students. owever, they were all a bit disconnected.”

In attempt to mend this disconnect between the available workshops and the amount of experience gained by the students, Daly worked with the Abingdon to create a new program.

“We wanted to create a program with the Abingdon that would take all the individual workshops and have them connect to each other, and ultimately build toward a climactic learning experience.” Daly said. “We wanted something that would require students to participate from the beginning through the end and to come away with a great deal of professional experience and networking along the way.”

Students are able to get involved in a variety of roles, including playwrights, directors, actors, stage managers, house managers, sound/ lighting board operators and many others.

Prior theater knowledge is not required in order to be a part of this program.

“In fact, the festival is a great place for people who are new to theater to get their feet wet and try it out.” Daly said. “Because the plays are short (10 minutes each) the commitment is a little lighter than our full-length mainstage
productions.”

Sophomore nursing major Danielle Radeke got involved with the New Play Festival as a freshman stage manager and says that this program allowed her to further her career in theater.

“I wanted to get involved with the theater department as a freshman.” Radeke said, he first year I went was the first time I stage managed, and because of it I went on to stage manage my first full length show with ourth
Wall Theater (The Pillowman).”

Freshman theater and English major Maggie Richardson also had a positive experience with the festival, learning aspects of theater that were previously foreign to her.

“I was nervous because this was the first time that I did anything besides act, Richardson said, “But then people like [stage manager] Alissa Silverio and the other SMs [stage managers] and Kevin and the mentors guided me through it one step at a time… by the time I got to NYC on Thursday night the anxiousness turned to excitement!”

Although both Radeke and Richardson had to apply to get the role of a stage manager, a process that is also required to be a playwright, director and actor, many of the roles are not nearly as competitive.

Radeke emphasized how easy it is for anyone to get involved.

“If you’re interested in getting involved, just do it. I know so many people who got involved over the past three years that have done it that say they weren’t sure, but when they did it was one of the best things they ever did.” Radeke said. “Everyone involved is so nice, and we’ve really become like a family, and we would love to welcome you in.”