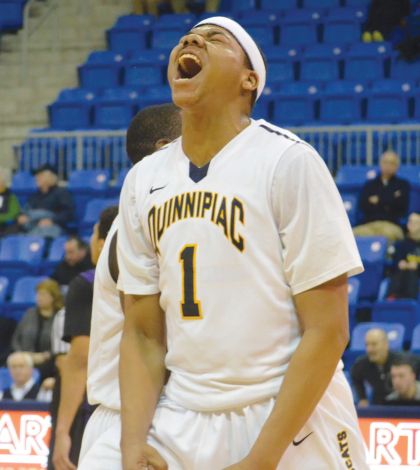 In a basketball career of twists and turns, it finally seems as though junior forward Donovan Smith has found his niche at Quinnipiac.

Smith sits in the upper portion of the stat sheet in key areas midway through the 2015-16 season. He is currently third in points per game (8.1) and second in rebounds per game (6.3) for the Bobcats, while second in blocks per game (1.8) in the Metro Atlantic Athletic Conference. 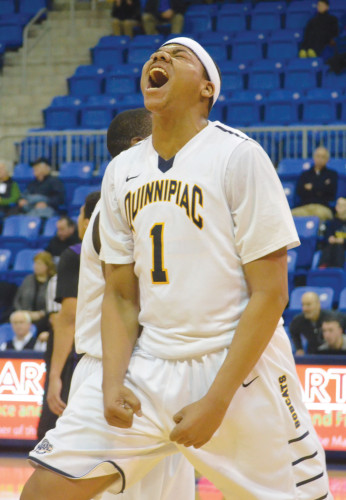 Although his numbers indicate his importance to this team, the Quinnipiac Bobcats have only been Smith’s second team in the last seven seasons of his career.

“I didn’t play basketball in high school,” Smith said. “I only played half of my freshman year and then after that I stopped. In my life away from the court, I didn’t really do much besides play video games and I used to watch the Blackhawks; originally my favorite sport is hockey.”

Instead of picking up basketball again after high school at the Division I level, Smith decided that the smart move was to join Triton College and gain experience first at the junior college level for two years.

“If I didn’t to go junior college I probably wouldn’t be able to go Division I, but junior college preps you,” Smith said.. “The waking up for early mornings, the work outs, school, all of that good stuff just prepares you for the big moments.”

He ended his career in the National Junior College Athletic Association (NJCAA) with record-setting numbers at Triton. Smith left as Triton’s all-time leader in blocked shots (205) while also setting the single-game blocked shots record with 11 blocks in one game. Smith also finished 17th all-time in scoring (832) and 16th all-time in rebounding (470).

It was Smith’s ability to block shots that initially landed him on Quinnipiac head coach Tom Moore’s radar.

“You could tell he was very skilled for his size and he had great timing as a shot blocker,” Moore said. “We knew he had the potential to help us at both ends of the floor.”

Despite receiving offers from other schools such as Eastern Kentucky and Eastern Illinois, the scene and vibe around Quinnipiac is what initially drew Smith to play at a Division I level in the shadows of the Sleeping Giant.

“With the transition from junior college to Division I; you just have to figure out which school is going to fit you the best and everything about Quinnipiac was the right fit,” Smith said. “I really wanted to commit to Quinnipiac; it puts you in a different mindset that makes you     work harder.”

Adjusting to playing at the highest level of college basketball is never easy, but senior guard Giovanni McLean notes that Smith’s transition has occurred fluidly.

“Donovan has come a long way from a basketball aspect of things, learning the game and stuff like that, from the beginning of the season until now,” McLean said. “He’s willing to learn all of the time and that’s what makes him good.”

In early December, starting forward Chaise Daniels went down with an injury and it was up to Smith to temporarily fill in those big shoes with a starting role of his own.

“That really was a smooth transition for me to step up because this is what they recruited me for,” Smith said. “I have the experience at the junior college level — even though I don’t really have any experience other than that — but I have played in big games and I have put in the work to be able to come in and do what I have to do.”

Moore noted how much of a help Smith was during the period of transition.

“We lost the luxury of bringing Donovan along slowly when Chaise was injured. We needed him to contribute with Chaise out and he came through in the short term,” Moore said. “We put a lot more on his shoulders than we wanted to so soon, and he really responded.”

In his fourth game starting in Daniels’ place, Smith tallied his first double-double of the season by registering 16 points and 12 rebounds against Oregon St. on Dec. 21.

“The Oregon State game really showed the talent that he has,” Moore said. “Oregon State has a big front line, even by Pac 12 standards, and Donovan completely passed the eye test, showing that he belonged out on the floor with them. He was grabbing rebounds above the rim, stepping out and hitting face-up jumpers. He could have changed uniforms with the Oregon State guys and fit right in.

Smith would go on to average 12 points, 2.3 blocks, and 8.4 rebounds for the current No. 1 rebounding team in the nation (44.9 rebounds per game) during his eight-game stint as a starter and there was nothing but praise from his injured predecessor for his efforts in his first big role position.

“This is his first year at Quinnipiac, so it was good for him to get some reps under his belt,” Daniels said. “He logged in some big minutes while I was out, he got more acclimated with the team, and I felt like it helped the chemistry of the team with him having the starting role.”

Being a team player on and off the court is something Smith takes great pride in, and his teammates, including freshman forward Abdulai Bundu, are aware of his behavior as well.

“Donovan as a teammate is a goofball, but when it’s time to get serious he really get’s the job done,” Bundu said. “It’s always good to have people like that around because sometimes you’ve gotta have fun, but on the court I know he’ll be there.”

Despite the great chemistry off the court, it seems as though the team is just starting to find its in-game rhythm as it currently sits 8-14 overall and 5-8 in the MAAC. The potential this team has relies on teamwork and hard work to catapult them to the top.

“We definitely can be a top four team in the MAAC, maybe even top two,” Smith said. “We always stop the other team’s star player, but sometimes we just can’t get the ball to go in for us. I feel like we’ve been working really hard on that in practice, so hopefully we just keep putting up points.”

“This is a family, this is a brotherhood, and we just have to be able to work hard for each other and not let any one of our teammates down.”