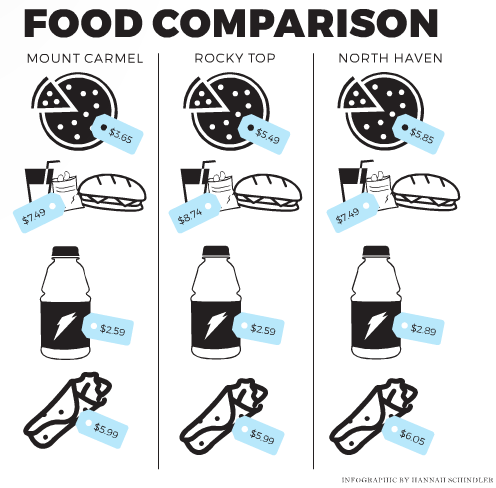 Like many other students, junior Caitlin Reid goes to the dining hall every week.

However, she never noticed that some items cost more or less depending on which campus they are sold: Mount Carmel, York Hill or North Haven.

Some food items at Cafe Q on Mount Carmel are less expensive than the same items in Rocky Top Student Center on York Hill or the North Haven cafeteria, and the food at North Haven tends to be the most expensive of the three campuses.

Reid said she thinks these price discrepancies are unreasonable for graduate students who attend all of their classes at the North Haven campus.

“I feel like that is an unfair price gap, because North Haven caters to mostly the graduate or future graduate students who will have years of tuition to pay,” Reid said.

Associate Director of Dining Services Leean Spalding said Chartwells will work to make sure the prices are the same on all three campuses in the future.

“Pricing for items sold in the dining facilities is approved by the university,” Spalding said in a statement. “The products sold across campus are priced the same with only a few exceptions due to supplier pricing. This is the first time the price discrepancies have been brought to the attention of the university and Campus Dining, and we will be auditing all the pricing on all three campuses so pricing will be consistent. Students and all guests should report any concern about campus dining directly to management.”

Reid’s opinion is shared by senior Jackie Dembro, who also had not noticed the differences in price between the three campuses.

Dembro said it is unfair for York Hill to charge more for the same food items, since students on York Hill are given less money on their meal plan.

The Bobcat Dining plan, a meal plan of $1,420 per semester, is given to students that live in traditional residence halls on Mount Carmel, such as the Commons, Village and Mountainview. Students living on York Hill are provided with the Boomer Dining plan, which consists of $1,020 per semester.

“People who live on York Hill already have less meal plan money, and because of that, need to buy more groceries,” Dembro said. “Some people might not have time to cook meals and would therefore run out of their meal plans more quickly.”

Junior Meghan Ahern said she thinks the price discrepancies are because of the quality of food that is served on each campus and the type of students that eat there.

“North Haven is mostly graduate students, so Chartwells probably assumes they’re adults and have more money [than undergraduates],” said Ahern. “I think York has better food in general and it’s more specialized, so that could be why it’s more expensive. I think prices in general are ridiculous, though.”

Students such as Dembro have previously voiced concerns about food quality, high prices and getting charged for the wrong items.

“I think the worst part is that Chartwells sends out surveys every semester and it seems like they really care about students’ feedback, but then they never seem to do much about the food quality or high prices that students complain about,” Dembro said.

Chartwells employees at the North Haven campus refused to give prices for certain food items.