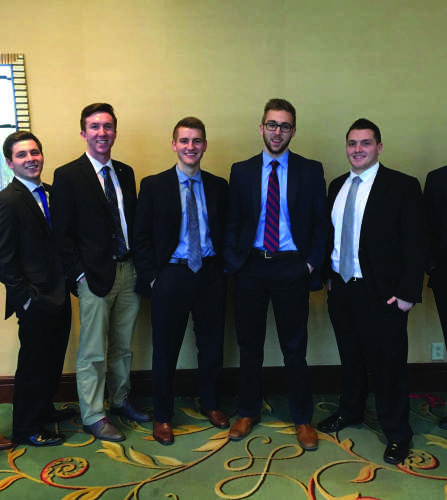 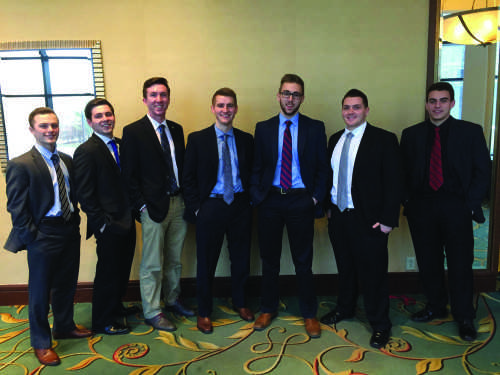 Sigma Phi Epsilon is active again after returning from a September cease and desist order. The fraternity’s new president said the chapter is recruiting members and working to increase philanthropic efforts.

The university began investigating the fraternity for hazing allegations in September, causing the chapter to have to halt all operations.

Although Cowan would not comment on the hazing allegations specifically, he said the members of Sigma Phi Epsilon handled the situation well.

“I was just so proud of our guys,” Cowan said. “They handled the situation with class, professionalism and patience that things would be resolved soon enough.”

“Going through this process, I’m sure many people start to form opinions or generalizations about our organizations without knowing all of the information,” Cowan said. “Although unfortunate, we would rather let our actions as leaders on campus, our work ethic in the classroom and brotherly love toward one another speak for themselves.”

Now that the members are allowed to resume activities, Cowan said Sigma Phi Epsilon is ready to get back in action and create a stronger organization.

“After receiving the email that the cease was lifted, I think we all felt incredibly excited and ready to get back to work,” he said. “Being back, we’re excited to keep getting better as an organization, growing through recruitment and building balanced men at Quinnipiac.”

Like the other Greek life organizations, Sigma Phi Epsilon is in the midst of informal recruitment. Cowan said so far recruitment has been incredibly successful.

“Our numbers have not been noticeably affected by the cease,” he said. “By all accounts, we are receiving just as many men as some of the other fraternities of similar size. I think that is attributed to the type of men we have in our fraternity already. They are so involved in other organizations on campus that other students have seen the Sig Ep values and ideals lived out even when our fraternity was not operating.”

As president, Cowan plans to help the members of Sigma Phi Epsilon grow within the community and expand as leaders. He also hopes to continue the fraternity’s work with FARA+ CT.

“I’m excited to help our guys become better leaders on campus, helping them grow as men and continuing to do outreach into the Hamden-New Haven area through various community service outlets,” Cowan said.

FARA+ CT is an organization that helps raise money for Friedreich Ataxia, a debilitating, life-shortening, degenerative neuromuscular disorder, according to the Friedreich Ataxia Research Alliance website. Cowan said the organization is one the members deeply care about so continuing to work with FARA+ CT is one of his major goals during his time as president.

Just a few weeks before the hazing allegations surfaced in September, Sigma Phi Epsilon made local news with an act of kindness. Members of the fraternity carried junior Joey Mullaney up Sleeping Giant because he had never climbed before, being wheelchair-bound because of Friedreich Ataxia.

Beyond continuing to work within the surrounding communities, Cowan said he wants to strengthen the relationship between the fraternity and Campus Life.

“I think some positive changes I’m ready to enact is to have an even better partnership with the Student Center, specifically in working with [Director of Fraternity and Sorority Life] Katherine Pezzella,” he said. “She has already helped us tremendously in getting back and caught up, so I’m looking forward to having a great working relationship with her and her office.”

Cowan also hopes to work with other Greek life organizations on certain causes.

“I’m also looking to getting our organization more interfraternal by working with some of the other great fraternities on this campus on some causes we really care about,” Cowan said.

The fraternity has a few upcoming recruitment events, including a brotherly love night and a formal dinner, according to Cowan.

“We’re excited to talk to the potential new members about our cardinal principles of virtue, diligence and most importantly, brotherly love,” Cowan said.

The fraternity will also be launching a campaign in partnership with Alpha Delta Pi, Cowan said. The campaign, called #LiveYourOath, is set to launch after spring break.

“#LiveYourOath…aims to educate on, spread awareness and help prevent sexual assaults on campuses across the country,” Cowan said. “As Sig Eps, we took an oath to live a life of virtue and to act as gentlemen in all aspects, so we feel it is our responsibility to help prevent this nationwide epidemic.”

Cowan said in order to prevent future issues like the one they encountered in September, Sigma Phi Epsilon will be communicating clearly with Quinnipiac and the fraternity’s national headquarters.

“We will continue to be transparent to the Office of Fraternity & Sorority Life and foster an open channel of communication to ensure we are always on the same page as the school and our national [headquarters],” Cowan said.

There are six other members of Sigma Phi Epsilon’s executive board: sophomore Jack Wigglesworth; and juniors Michael Rocco, Jonathan Nanna, Kevin Casserino, Jonathan Volpe and Jimmy McQuade. Volpe is the only member of the executive board who is a returning member.

The other executive board members did not return a request for comment for this article because they wanted Cowan to speak on behalf of the fraternity.