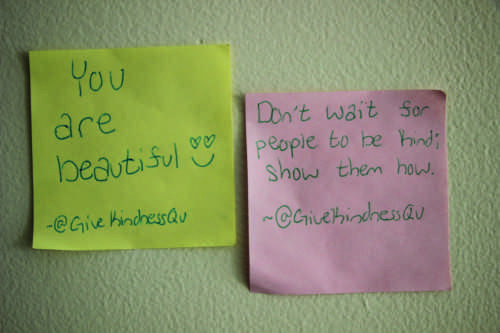 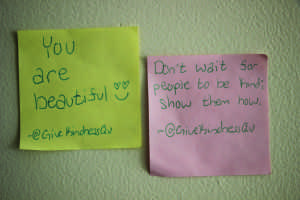 Have you ever seen Post-It notes stuck around campus with compliments and positive quotes? Have you received an anonymous shoutout on social media? These things can be attributed to GiveKindness QU.

Today, the idea has turned into a whole organization, stretching beyond the Quinnipiac community.

GiveKindness can be found at Hofstra University, Farmingdale State University and more. High schools are also advocates for spreading kindness, but Quinnipiac is the place where it all started.

The mission is simple: being dedicated to promoting the importance of kindness on campus, striving to emphasize how easy it is to spread kindness and showing how tremendous the impact of kindness can be. It is an anonymous, chain reaction-seeking, kindness-giving organization.

Students can message GiveKindness QU through Facebook or Twitter with their anonymous, kind post about their peers and friends. The person will then receive a notification that they have been posted about, but are not told who wrote the compliment.

“I’ve actually submitted to it before for all of my close friends,” freshman Kate McGrath said. “I think it’s great to see so many people mentioned, and that the page is made about anyone who receives a submission, instead of a select group of people.”

At the time GiveKindness was originally introduced, Ashley Carle was a sophomore and was interested in joining. Now, as a senior she is the president of the organization at Quinnipiac.

Madison runs the social media for the organization at Quinnipiac and other colleges.

“[Madison] runs posts for all the campuses, so nobody on this campus knows who sends them [the kind messages] in, not even me,” Carle said.

Carle said Madison will give presentations at other colleges and high schools to initiate the movement elsewhere. She is not a student at Quinnipiac anymore, but she still heads the organization.

GiveKindness QU is not an established club here yet, but Carle and the other 12 members of the organization are pushing toward being funded. They are currently going through the process of becoming an official club.

Even though they aren’t funded yet, that has not stopped the Kindness crew from working hard.

Right now, everything bought for the movement comes out of the members’ own pockets.

The 13 members have meetings often and take the time to write Post-its with nice messages to distribute around the school. Each member is assigned to a building to stick notes. The team will also leave notes with a dollar attached in the library for someone to find while studying during midterms week.

In the spring, the organization hosts “Kindness Week” where hundreds of people come up to a student center table to write anonymous compliments.

“Kindness Week” features the “Positivity Poster” where students can contribute a kind quote or compliment to anyone and receive a GiveKindness gift.

Around Easter time, the Kindness crew will give out eggs that have kind quotes in them, as well as candy and, for some lucky egg-finders, gift cards.

Other events include a free bake sale where instead of paying money for baked goods, students write something kind about someone. The free raffle is another, where companies donate baskets and prizes and students receive tickets to enter into the drawing by contributing kindness.

“I love the message that GiveKindnessQU gives,” freshman Hannah Dunlevy said. “Sometimes it just brightens up my day and improves my confidence and makes me smile probably for everyone it does too!”

In the next few weeks, Quinnipiac students will be seeing “Kindness Passes.” If a student does something nice for someone else, that student would give a “Kindness Pass” to whoever they were kind to. That person must pass it on within the next 24 hours to make somebody else’s day.