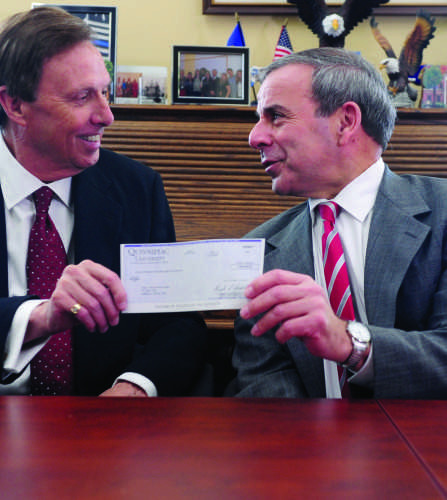 Quinnipiac University President John Lahey presents North Haven First Selectman Michael Freda with a $400,000 check Tuesday, Feb. 1, 2016, at North Haven Town Hall. The annual voluntary contribution to the town is a show of support and partnership between the university and the town.

President John Lahey and the university gave $400,000 to the town of North Haven at a ceremony on Monday, according to a press release.

Lahey presented the voluntary payment to North Haven First Selectman Michael J. Freda in Freda’s office. The university chose to give $260,000 to the town because this amount is 40 percent of what North Haven got in 2014 from a state program because Quinnipiac does not pay taxes on property that is used for educational programs. Quinnipiac then decided to give another $140,000 to the town for outdoor lighting for the North Haven girls’ softball program.

“This voluntary payment represents an affirmation of the university’s ongoing support and appreciation for all that North Haven does for Quinnipiac,” Lahey said in a statement.

“We truly appreciate how the leadership of the town of North Haven has supported Quinnipiac as the university has invested more than $300 million in constructing the North Haven campus,” Lahey said in the statement.

Freda said in a statement that Quinnipiac is becoming an important asset to North Haven.

“Quinnipiac continues to demonstrate an interest in the concerns and welfare of our community through its concerted and ongoing efforts to give back to the town,” Freda said in the statement. “This healthy relationship is dependent on maintaining an open line of communication between our town officials and the university. This communication allows for a strengthening of personal alliances and keeps our offices current on emerging plans and objectives.”

This will be the first year Quinnipiac does not make a voluntary payment to Hamden in several years, Associate Vice President for Public Relations John Morgan confirmed. Connecticut passed a law last year requiring Quinnipiac to pay property taxes on houses it owns and rents to students.

“In Hamden, the gifts we had made in the past were in lieu of taxes,” Lahey told the New Haven Register on Monday. “We have made a payment already for the overtime for the police — in particular for the athletic games — as we did last year. We also will be paying taxes on the properties we rent to students consistent with the bills that were passed this past year. Instead of making a voluntary contribution we will be actually paying taxes that I’m told will be in the $350,000 range and I think the amount we gave for the overtime was also in the $300,000-plus range.”

This North Haven payment is less than the amount Quinnipiac voluntarily gave to Hamden last year. Last March, the university gave Hamden more than $1.2 million, after Lahey delayed the payment because he opposed a proposed Planning and Zoning amendment. In previous years, however, the university had given Hamden $100,000 each year.