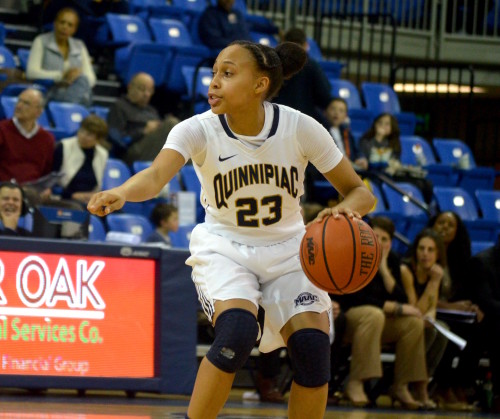 Nearly four weeks after losing 63-60 on the road to Monmouth, Quinnipiac women’s basketball (12-7, 7-3 in MAAC) avenged itself with an 85-58 victory over the Monmouth Hawks (6-13, 4-6 in MAAC) on Thursday evening at the TD Bank Sports Center in Hamden. With the win, the Bobcats move their winning streak to seven games.

Much like Quinnipiac’s 94-52 stomping of Siena on Jan. 24, the Bobcats’ offensive performance set the tone early. 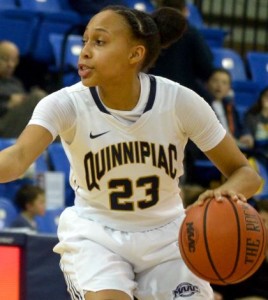 Paula Strautmane, who has averaged 12 points-per-game while shooting 52 percent from the floor over the last three games, set the tone contributing 10 points to Quinnipiac’s 31-11 first quarter run on Monmouth and finished with her first career double-double.

“I’m obviously happy for [the double-double], but I’m really happy for the win,” Strautmane said.

Every single player on the roster for Thursday’s game scored at least two points, which included 47 bench points to Monmouth’s 27.

Quinnipiac head coach Tricia Fabbri was not available after the game, but her assistant Mountain MacGillivray talked about the amount of depth on the roster.

“I don’t think we really have a bench,” MacGillivray said. “We just have a team that can play.”

Sarah Shewan finished with 14 points, and saw the team’s offense carryover from the win over Siena.

“Definitely,” she said. “I think our game was centered on the outside more than the inside. Recently, we can do both. We’re doing great things down in the post.

MacGillivray has seen differences in the team over the course of the last two wins.

“It stringed back-to-back games that we’ve shot the ball well,” he said. “We’ve been hot inside and out. It’s familiar to last year’s team because every player on the team is looking to score when they get [the ball] and becoming a threat making the defense respect each player.”