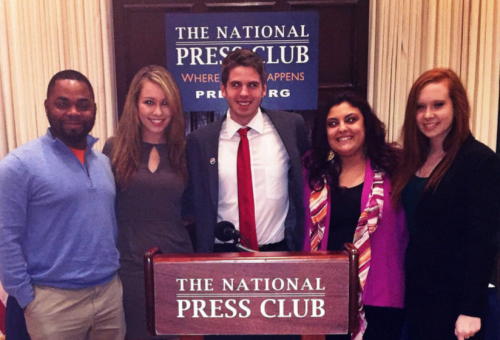 Shamar McCrae, Cassidy Fitzgerald, Colton Hoffman, Angela Bonito and Nicole Dwyer (from left to right). The photo was taken at The National Press Club where the students attended a dinner reception on behalf of The Washington Center.

President Barack Obama’s last State of the Union address not only captured the attention of the nation, but also of 10 Quinnipiac University students.

Political Science Professor Scott McLean took 10 students on a trip to Washington D.C. where they were able to experience the address live in an auditorium with students from other universities. The students went through Quinnipiac’s Washington Semester Program, directed by McLean.

Unfortunately, the students were not in the Capitol building for the State of the Union. They were in Washington for the entire 10 days prior, and watched the address together in the auditorium with other students from around the country in the same program.

The program sends about 10 students every semester, including summer and January terms, to the country’s capital for programs that combine a great internship and an advanced seminar, according to McLean.

“Many students attend the trip to obtain extra credits, get some much needed off-campus experience and to enrich their educations and broaden their horizons,” McLean said.

Students participated in the program at the Washington Center, which is affiliated with Quinnipiac. They watched the address in the center.

The Washington Center provides internships and academic seminars for students who study for the semester full-time in Washington for fall and spring semesters, as well as January and summertime three-credit seminars.

“‘Inside Washington’ is the seminar our students were participating in,” McLean said. “Week one was about the upcoming presidential election, and week two was about the media and how it covers Washington as well as how political actors respond to media coverage.”

More information on the seminars and “Inside Washington” can be found on www.twc.edu/seminars.

One of the students who benefited from the trip was senior Angela Bonito.

“The Washington Center Seminar was a great experience,” she said. “I decided to attend it because as a political science major I have always wanted to visit Washington D.C. and see where all the action takes place.”

The program invited a variety of speakers come talk to the students each day. Students were also offered the opportunity to visit places such as the Israeli Embassy, The American Action Forum, The Office of Preservation for Social Security and Medicare, and Media Matters for America.

“Attending this program during an election season was certainly an experience and it was great to hear what political scientists and past politicians felt about the election of 2016,” Bonito said.

“I personally was a little disappointed with the address as I felt that Obama spent a lot of time taking credit for things that he wasn’t entirely responsible for,” she said. “However I think he addressed his feelings and thoughts for the future of America very well and was certainly inspirational in doing so. Overall, the program was a great opportunity and being there during the year of an election and during the State of the Union address made it even more interesting.”

Although students must get themselves to the District of Columbia, the trip is open to every student with a GPA of at least 3.0. Financial aid also applies, although students have to pay for three credits worth of J-term tuition to attend the program.

“This is a great program because every student who goes to Washington comes back with very marketable skills and tremendous confidence that they can do amazing things,” McLean said.

In the past, students have done work for CNN, Washington Post, various TV stations, Congress, the White House, Homeland Security and a variety of advocacy groups involved with important causes.

“Many of the students go on to great success by returning to Washington after graduation to work on Capitol Hill with a member of Congress, or in media or public relations,” McLean said.