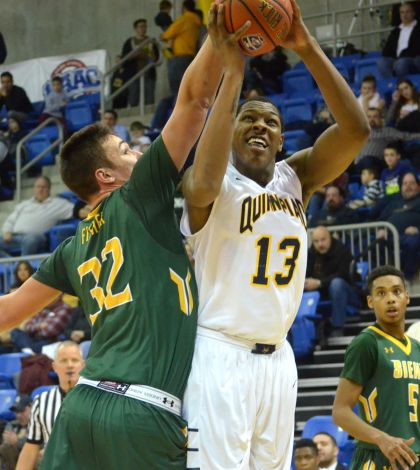 Coming off a loss against Monmouth that dropped it below .500 in the Metro Atlantic Athletic Conference standings, Quinnipiac men’s basketball looked to bounce back Saturday evening at home against Siena. 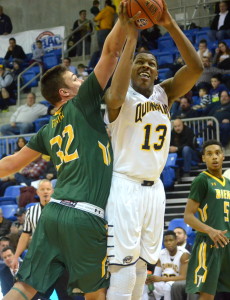 However, they fell short 64-52 in a game that got away late in the second half.

“We’re playing like a team that is 5-10 right now,” Quinnipiac head coach Tom Moore said. “We are not playing a disciplined and tough offense in the game when it is required. That’s something where I believe these guys will grow and continue to improve.”

Quinnipiac’s offense struggled early in the first half, as the Bobcats found themselves down 19-7 by the time the first media timeout rolled around. But going into halftime, Quinnipiac was able to cut the deficit to 27-21.

Quinnipiac came out of the second half a different team offensively. The Bobcats went on a 17-5 run to start the half and looked like a team that was destined to hold on.

Quinnipiac’s offense went through a couple of dry spells offensively and couldn’t hold off Siena’s comeback.

“The No. 1 thing we have suffered from all year has been the lack of experience, poise and scorers on offense that we have needed in key parts of games,” Moore said. “We have a tendency when stakes to get high to not play quite as well.”

Siena went on a 17-5 run to end the game. The charge was led by Brett Bisping, who scored 14 of his game-high 18 points in the second half.

“In the second half I thought Siena was a more complete and more balanced team in terms of how they looked on offense and defense,” Moore said. “His [Bisping’s] 19 minutes in the second half was terrific. He is playing like one of the best frontcourt guys in the league and he gave it to us tonight.”

With the loss, the Bobcats fall to 5-10 (2-4 MAAC). Quinnipiac will be back in action on Sunday at 2 p.m. when the team hosts Canisius.

“It is a huge game,” Moore said. “Every game is important for standings and positioning for the MAAC tournament. We are not used to being 5-10 at Quinnipiac. I don’t want that becoming part of the fabric or being accepted by anyone that’s part of the program.”