A tribute to David Barber 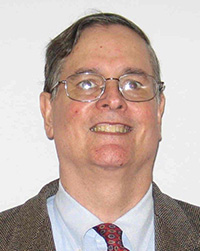 The university lost economics professor David Barber on Nov. 27, 2015. Barber passed away in his sleep at the age of 66.

Barber taught at Quinnipiac for 10 years, according to MyQ. He taught classes in the School of Business and the College of Arts and Sciences.

Jared Ibelli, a sophomore business management major, had Barber for a microeconomics class during his spring semester of freshman year. He said Interim Chair of Economics Donn Johnson came into his class to tell the students the news.

“Everyone in my class stopped talking,” Ibelli said. “You could hear a pin drop. It was crazy. We never expected it.”

Johnson said the reason he went to the two sections Barber taught to deliver the news in person was because he felt like it was the best way to tell the students the news.

“I did not want to send an email. I didn’t want it to show up on the QU website. I wanted to actually talk to them for a few minutes,” Johnson said.

Barber was born on April 24, 1949, in Queens, New York and grew up in Stony Brook, New York with his family, according to his obituary. Barber attended Middlebury College where he majored in economics and French and graduated with a Bachelor of Arts in 1971. He received his MBA from Wharton Graduate School of Finance in Pennsylvania two years later.

Before he found his way to Quinnipiac, Barber had several jobs in Chicago and New York. In 1985, Barber and his wife Joyce Heffernan moved to Fairfield. In 2001, he began to work as an adjunct professor of economics at colleges in New York and Connecticut.

Dean Robert Smart of the College of Arts and Sciences and Dean Matthew O’Connor of the School of Business wrote a press release on Barber’s passing for the university.

“He was engaging, inspirational and committed and will be deeply missed by his students and faculty colleagues,” the press release said.

Ibelli said Barber was always concerned with helping his students.

“He was a pretty nice guy,” Ibelli said. “He always had the best interest of the student. He always offered help if you needed it and extra credit when you needed it.”

Barber was always willing to cover a class or to take on teaching a section whenever he was asked, no matter what day or time the class was, according to Johnson.

“When we needed a section or a class to be covered for us, he would come through–he would cover for us. David never said no. The only time he would ever say no was if he was teaching somewhere else at the same time,” Johnson said.

Johnson said Barber was always ready to jump at the opportunity to teach sections at Quinnipiac. Before he passed away, Johnson said he was lined up to teach three sections for the spring 2015 semester.

Though Barber could have retired, Johnson said he continued to teach because it made him happy and he enjoyed teaching the students. Any time Johnson saw Barber, he said he would always bring up a new topic or situation that he wanted to introduce to his students. Johnson said he was constantly thinking about how to apply economic theory to new situations.

“He was so happy, he was so enthused because he got to do what he wanted to do,” Johnson said.

Sophomore Jaiden Martin had Barber for macroeconomics this semester.

“Barber used to talk about his college days and compare them to what college is like now,” Martin said. “Hearing those stories was always interesting.”

Martin said his class was in shock after hearing the news of Barber’s passing.

“I will remember him as a great guy and someone who loved to teach,” he said.

Kieran Summers, a sophomore entrepreneurship major, had Barber this semester for macroeconomics as well. Summers said Barber’s death was surprising for everyone that knew him but his legacy will live on.

“I will always remember how Barber would describe his passion for teaching that was inspired by his father – who was somewhat of a teaching legend, as Barber usually described him,” Summers said. “But in the end, Barber is the real legend. He will live on in our hearts and economic knowledge.”

UPDATE: The original article has been updated to include information and quotes from faculty member Donn Johnson.