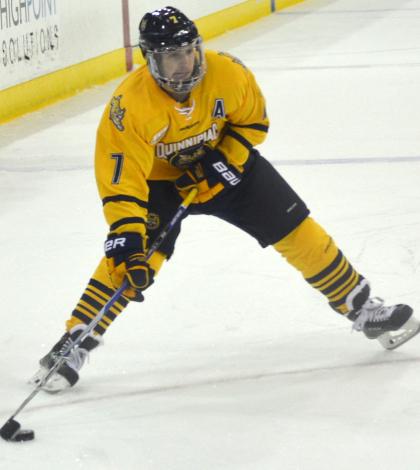 The Quinnipiac men’s ice hockey team lost its first game of the 2015-2016 season in a 4-1 defeat against No. 12 Boston University. The Bobcats came in with a 15-0-2 record and the sixth longest undefeated streak to start a season in NCAA hockey since 1970.

“Realistically, we weren’t going to go undefeated,” Quinnipiac assistant captain Sam Anas said. “It’s not good that we lost, but I think it was necessary. It’s good to lose to a good team as opposed to coming back and losing to a weaker team.”

The Bobcats jumped on the board first just 6:22 into the first period. Landon Smith fed Anas with a pass from the left side. Anas weaved his way from right to left up the ice before finishing past Boston University goalie Sean Maguire on the backhand for his tenth goal on the year. 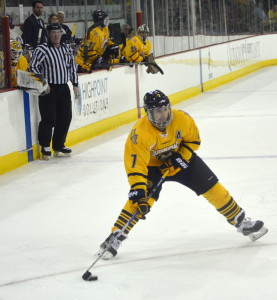 “We got down 1-0,” Boston University head coach David Quinn said. “It really felt like we were on our heels for the first six or seven minutes and then I thought we really recovered.”

The Terriers tied the game up with just over five minutes left in the opening period. Freshman Jordan Greenway dished a pass to senior assistant captain Matt Lane from the crease. Lane beat Quinnipiac goalie Michael Garteig to the left side of the net for his seventh goal on the season, ending Garteig’s program record of holding opponents scoreless at 209:11.

Boston University then took the lead shortly after killing a Quinnipiac power play early in the second period. Junior Robbie Baillargeon sent a backhand shot through Garteig’s stick side for his third goal of the season. Quinnipiac head coach Rand Pecknold recognized that the goal was an uncharacteristic concession for Garteig.

“I think [Garteig] would like that one back,” Pecknold said. “He’s been so good this year. It’s going to happen once in awhile.”

The Terriers tacked on two goals in the third period to seal the victory. Freshman Bobo Carpenter scored his second goal in as many games with a blast from the right side past Garteig’s right shoulder. After Quinnipiac pulled Garteig in attempt to tie the game up, Lane knocked in an empty-netter with :20 left to close out the 4-1 victory.

With the win, Boston University improved to 9-6-3 on the year and 2-4-2 away from home. Lane says that the victory was not only good in giving the Bobcats their first blemish, but that it was also as a good victory to end the first half of the Terriers’ season on.

“It’s huge, not only beating them, giving them their first loss, but just ending the first semester on this note,” Lane said. “The fact that they were undefeated gave us a little extra motivation going into the game, but as a team, we know what we’re capable of. This game was huge for us going into the break.”

On the other hand, the Bobcats now sit at 15-1-2 on the season. Although the Bobcats put up back-to-back 3-0 wins at Yale and Brown over the past weekend, the team has only put up two goals combined in their last three home games.

“I thought our effort tonight was poor,” Pecknold said. “I thought we lacked composure at times. I thought we panicked a lot and just really, overall, lacked a commitment to do what we’ve been doing, playing to our identity.”

Quinnipiac returns to the ice on Dec. 29 as it starts a home-and-home series against Princeton. Pecknold says the team will use its break to regroup and prepare for the conference foe.

“We’ll reload here for the second half of the year and get the guys focused for Princeton once we get back on the ice,” Pecknold said.