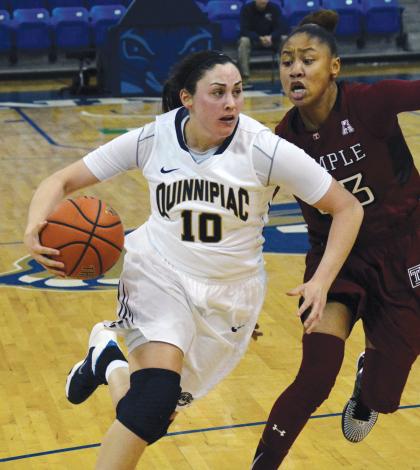 Despite her brief foot injury to begin her senior campaign, Maria Napolitano has taken her leadership role in stride for Quinnipiac women’s basketball.

The youngest of three college athletes, a native of Cincinnati, Ohio, Napolitano never had a doubt she would sport a Division I uniform.

“There was no other way for me to go to college,” Napolitano said. “I was going to be a college athlete.”

Napolitano’s sisters, Angela and Lauren, both competed at the collegiate level. Angela played soccer at the University of Florida and Laura played field hockey for the home state team, the Ohio State Buckeyes.

“I went to so many of their games,” Napolitano said. “I saw NCAA appearances, SEC tournaments and Big 10 tournaments. A lot of people don’t get to experience that and I think that helped me.” 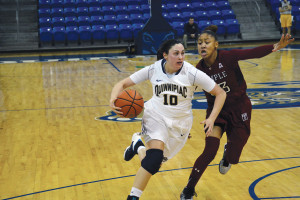 “I obviously liked her length and size for a guard position, including her competitive nature and skill,” Fabbri said. “But she really had seen first-hand commitment that it takes to be successful at the Division I level. That had a real appeal to me.”

Along with the Napolitano genetics that breed college athletes, the senior saw her success bloom in the Quinnipiac basketball family.

“Here, we’re a tight unit,” Napolitano said. “It’s not hard to get used to playing with [my teammates], when you spend time with them off the court.”

Even though she didn’t start in her junior season, Napolitano earned the Metro Atlantic Athletic Conference Sixth Player of the Year Award, leading the Bobcats’ “Gold Rush” unit off the bench. Napolitano was also crucial to the 2014-15 team that led the MAAC in total bench points (906) as well as bench points per game (25.9 PPG).

She also received Quinnipiac’s 2015 Edwin L. Steck Award, presented each year to the student-athlete who demonstrates outstanding athletic abilities with a sense of leadership and sportsmanship.

While Fabbri knew Napolitano would become the front woman of the squad, she lets the role take care of itself.

“Those relationships develop organically between a player and a coach,” Fabbri said. “They can’t be forced. Those conversation happen in the office, on the court, but also team dinners.”

So, it was not a surprise to Napolitano that she would be asked to take on more of a leadership role for her final year.

“Coming into the year, I knew I was going to be one of the leaders of the team,” Napolitano said. “It was natural for it to be the next progression. I had to be more mature because I was that new leader.”

While Napolitano is one of four captains, (Katie Carroll, Carly Fabbri, and Adily Martucci), Napolitano received the most votes from coaches and teammates.

Napolitano’s new role would not change physical training, but she admitted her mindset needed an upgrade.

“I always worked extremely hard regardless of the position I’m assigned or whatever role I have to fulfill,” Napolitano said. “My mental mind had to be a lot different. I had to stay positive and not let myself be a higher priority than the team.”

While prepared for the new position, Napolitano injured her foot in the opener against Army West Point, causing her to miss a few games.

“‘Why did that have to happen?’ That was my first thought,” Napolitano said. “The timing of the situation was kind of bad.”

While Napolitano showed life on the bench, cheering on her teammates, her poor play in her next two games added to the stress of being the leader.

“I’m not going to lie, it has been more difficult on me,” Napolitano said. “I’ve tried to take on too much. I put too much on my shoulders. Coach recognized that in practice and told me to stop hitting home runs. Her line was to get on base. The shots I were taking weren’t the best shots.”

Returning from injury, Napolitano went a combined 10-38 from the floor in her following two games, putting a large burden of blame on herself.

“I can be my own worst enemy,” Napolitano said. “I was being very selfish. I wasn’t letting anyone get an opportunity. I wasn’t doing it intentionally. I thought the ball had to be in my hands to make the perfect play. Once I realized that, it’s starting to be a lot better.”

With the stresses of injury, performance and leadership impacting the guard, she turned to recent graduate, Gillian “Boo” Abshire for support and advice.

“I told her to enjoy every minute, practice and realize to enjoy it because it’ll go by quick,” Abshire said.

Abshire also knew her former teammate would thrive in the leadership role when Napolitano entered the program as a freshman.

“When she joined the team, you could just sense she had the making to become a leader,” Abshire said. “Last year, she stepped-up huge leading the second five. I know she will do a great job.”

Even with Napolitano’s play not reaching her expectations, Fabbri knows as well as anybody that her presence on the floor is second to none.

“There’s just an ease when she’s on the floor,” Fabbri said. “The comfort of having her back on the floor and having her play her best and her settling in.”

“She brings an intensity in communication, something we sometimes lack,” Carroll said.

However, Napolitano views her leadership to be by example.

“I try to lead by working as hard as I possibly can,” Napolitano said. “The majority of the time, I consider myself a defensive player than an offensive player. Defense is all heart. That’s what I pride myself on.”

The defensive prowess has dealt with and overcome many challenges this season, and she will play a major role on impacting the team the rest of the way.

“Maria has been the person to make plays, good decisions,” Fabbri said. “I think everyone always learns and see what’s great she is. We all sleep better at night with her in uniform.”